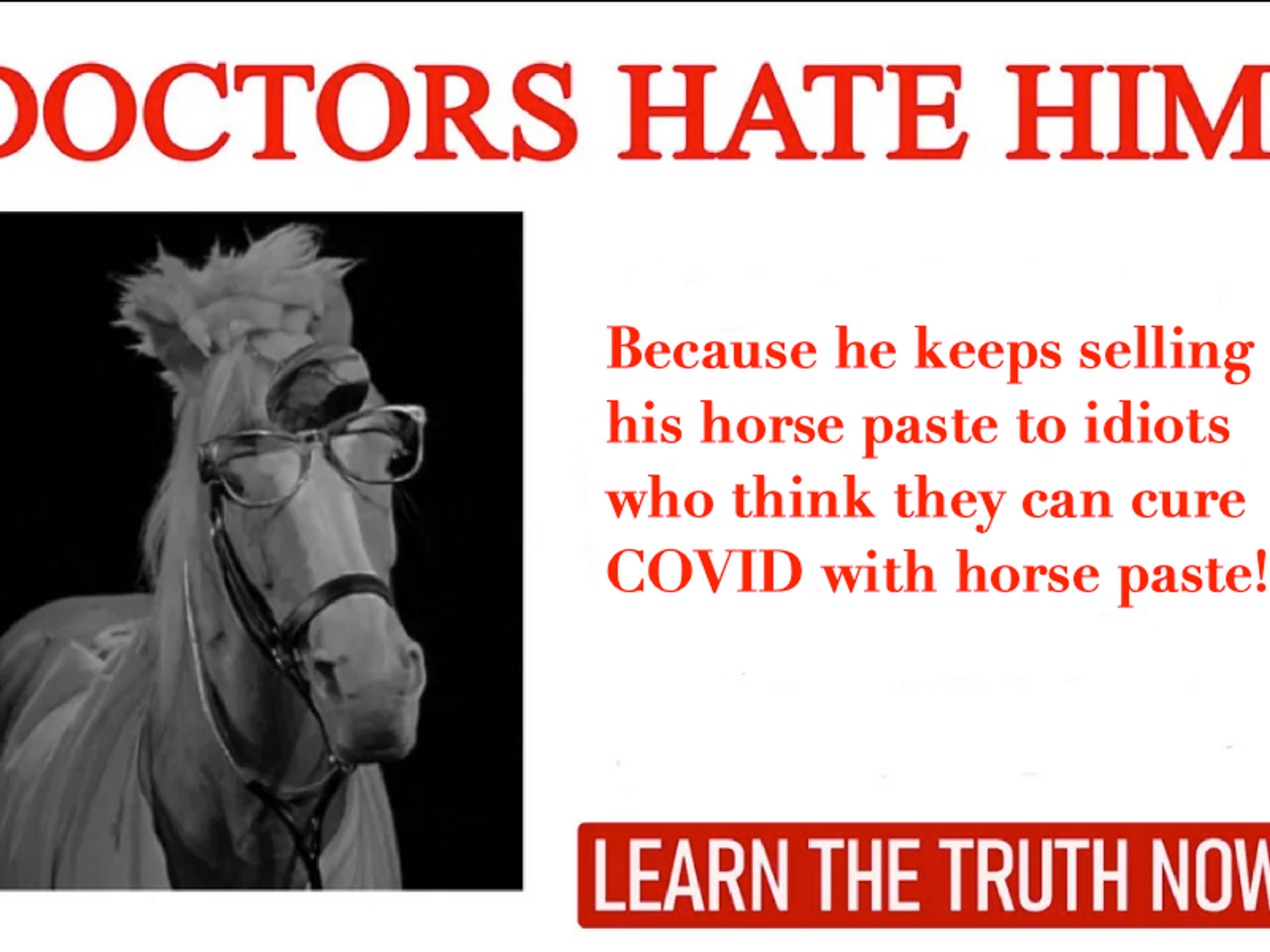 Governor Bill Lee has signed a bill that will allow people who believe, despite all available evidence, that Ivermectin can treat COVID-19, to get it without a prescription at a local pharmacy instead of at a feed store. This is very exciting news for people who are very wrong about things, and has been described by the Tennessee Conservative as "giving residents access to treat COVID-19 without a prescription," which it is not, because Ivermectin does not do anything to treat COVID-19.

That same site very seriously reports that this means that "Adults can complete a sheet giving information regarding pre-existing conditions, describe their current symptoms to the pharmacist, and the pharmacist can then dispense the correct dosage for that patient," which does not actually exist, because Ivermectin in correct or incorrect doses does not do anything to treat COVID-19.

On the bright side, should the dopes that take this end up in a bad way from taking it, they will not be able to sue the pharmacist that was forced to prescribe it to them.

AMENDMENT #1 rewrites the bill to authorize a pharmacist to provide ivermectin to a patient, who is 18 years of age or older,, pursuant to a valid collaborative pharmacy practice agreement containing a non-patient-specific prescriptive order and standardized procedures developed and executed by one or more authorized prescribers.

This amendment requires the board of pharmacy to adopt rules to establish standard procedures for the provision of ivermectin by pharmacists, including rules to provide the patient with a standardized fact sheet regarding ivermectin.

You know what? If people are that desperate to own the libs by taking medication that does not work and could give them seizures, then they should be free to do that. At this point, I feel the same way about this as I do with drugs that actually are illegal — it's better to "legalize" and try to make things as safe and unlikely to end in death as possible, since people are going to use them anyway. That's all you can do. Either they're going to get it from a pharmacist or they're going to get it from the farm, nothing we can do about it. We've shouted from the rooftops for at least a year now, and if they haven't gotten the message by now, no one can help them.

The truly obnoxious thing is that they want it to be treated like a medication that will actually do something to treat covid, and they want the pharmacists to play along and pretend like it will, doling out "fact sheets" and the like. That's what's dangerous.

A similar bill proposed in Ohio this week will force doctors to "promote and increase distribution" of Ivermectin and hydroxychloroquine and tell their patients that these drugs have been proven to be effective in treating COVID-19, despite the fact that they have not been.

“This is securing that right for an individual to make, with consultation with their health care provider, the best decision for their health care plan,” said the bill's co-sponsor, Republican Ron Ferguson. Of course, if a doctor is required by law to promote something even if they, as a doctor, know it to be unsafe, that is not actually so much making a decision in consultation with their patient as it is with the government.

Republicans have long lobbied for the state's right to interfere in the patient-doctor relationship, frequently forcing doctors to lie to abortion patients about fake potential risks and non-existent "abortion pill reversals" and give them unwanted and unneeded transvaginal ultrasounds meant to emotionally manipulate them into having a baby they don't want.

There is a reason why prescriptions exist, and why one must be secured, from a doctor with years of training, before taking certain medicines. Because people who don't have that training are not qualified to make those decisions. It's one thing to say "Hey, I was looking into this kind of birth control, what do you think?" and another to say "I would like to take oxycontin as a birth control pill!" and demand the doctor give you a prescription even though it's not going to do anything for you. We have enough problems with doctors prescribing certain medications based on which pharmaceutical companies give the best perks, we don't need this nonsense.

This does not seem like a thing that will end well.

AND THIS IS NOW YOUR OPEN THREAD!