Skip to content
Here's a story from Axios's Margaret Talev: 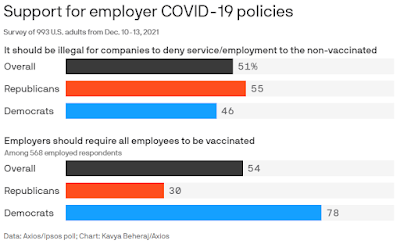 Half of Americans say it should be illegal for companies to deny service or employment to the unvaccinated, according to the latest installment of the Axios/Ipsos Coronavirus Index.

Why it matters: This carries real political risk for Democrats as President Biden's mandates on federal workers and large employers meet legal challenges across the country and Republicans use try to use the implementation of mandates as a wedge issue.

The survey shows there's deep, bipartisan resistance — even from those who support vaccine and mask mandates — to imposing severe consequences on those who won't go along.

For the moment, let's ignore the fact that you get 105% when you add the 54% of respondents who say employers should require employees to be vaccinated to the 51% who say mandatory vaccines should be illegal, which means that at least 5% of respondents agree with both policies, even though they're contradictory. Let's also ignore the fact that "service" is cited in the first question complicates it -- it's likely that some respondents support vaccine mandates for employees but not customers.

We're all supposed to believe that Democrats must practice "popularism" -- they should talk about popular Democratic ideas and only popular Democratic ideas; none of this woke "defund the police" or "Latinx" nonsense. Most Democratic politicians actually do just that, but word gets around that every Democrat is excessively woke because the right-wing media says so. But Republicans practice "unpopularism" -- they oppose even modest gun control measures even after horrific massacres, they oppose abortion even in cases of rape and incest, they block increased taxation of the rich, they prevent increases in the federal minimum wage, they reject state Medicaid expansion under Obamacare -- and none of this is ever described as carrying "real political risk," presumably because they do it so defiantly that voters just shrug and accept it as inevitable.

In addition, of course, they benefit tremendously from the work of reporters and pundits like Talev who assume that there's political peril in everything Democrats do and nothing Republicans do. And these journalists don't even notice that they're doing it.