Skip to content
You can't possibly have missed the recent Chris Christie mania in the mainstream media:

🚨 🚨 “Axios on HBO" exclusive: Chris Christie hits back at Trump, taunts him for losing and warns he won’t be bullied by his former friend https://t.co/gXacyQm3C9


Today we have Maggie Haberman interviewing Christie for The New York Times and anti-Trump conservative Matt Lewis asking at the Daily Beast, "Could Chris Christie and Liz Cheney Take Trump Down?"

Cheney would win no delegates whatsoever against Trump, and Christie would suffer the same fate. (Maybe New Hampshire would give him one.) But the press corps' mass delusion endures. Christie, in particular, is just what our media mandarins want: a GOP daddy, but an articulate one (even when he was being a verbal thug as governor, he was a well-spoken thug), and one who's very close to Wall Street. Bro! He even adores Springsteen, like nearly every white guy in the press corps.

The media's choice for the Democrats? Check out this Washington Post story comparing and contrasting Kamala Harris and Pete Buttigieg as possible future Democratic standard-bearers. The news about Harris is mostly negative:

... Vice President Harris traveled to Paris at a fraught moment for the U.S.-French alliance, as well as for her own tenure. She faced questions from reporters about whether she needed to make amends for a U.S. submarine deal that had enraged the French government, the latest thorny issue she has had to navigate. At one point, a reporter shouted, “Vice President Harris, did you apologize?”

... over time, many Democrats have grown more anxious about Harris’s performance and prospects, citing factors both within and beyond her control. Some say Biden has done his vice president few favors.

The vice presidency is often a political quagmire even for skilled politicians, as those in the office are tarnished by the president’s missteps while lacking the freedom to establish themselves as leaders. But, privately, some Democrats say Harris also deserves some of the blame for her political problems.

The word on Buttigieg is more positive:

Buttigieg’s growing media presence is evident in his many television interviews and other appearances promoting the infrastructure plan. On Monday, he fielded questions from reporters at the White House, the first Cabinet secretary to do so after the bill’s passage.

... already he has visited more than a dozen states and held roughly 300 calls with members of Congress in both parties to discuss the plan. He is expected to hit the road in coming weeks as part of a broader effort by Cabinet officials to advertise the law’s benefits.

It's acknowledged that he might face resistance because he's gay. It isn't acknowledged that he's an uncharismatic bore, despite the inclusion of one quote that reads like a Saturday Night Live parody of Buttigieg's no-enthusiasm-please approach to politics:

“When our communications team presents me with copy, I usually cross out the word ‘excited’ because I think it’s overused, and I often rub out the exclamation points because it’s not always my style,” Buttigieg said. “But we are excited, with an exclamation point, about what we’re going to be able to deliver.”

You thought Mike Dukakis was the most sleep-inducing presidential nominee possible? Hold our beer! (No, wait -- forget the beer. Make it a tap water, no ice.)

But Buttigieg is a McKinsey alum, so he's a safe Democrat, not like those radicals who want to give people stuff. There's also a Buttigieg puff piece at -- how's this for on-the-nose? -- Business Insider, and a reference in that story to the fact that Buttigieg is doing a lot of press thrills a few journalists on Twitter, among them Maggie Haberman (again): 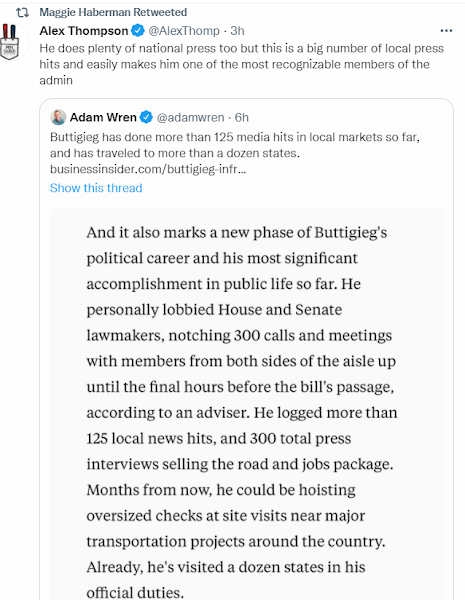 If President Biden doesn't run again, I assume Buttigieg will, but I also believe his candidacy will founder as a result of Black voter resistance. But a Christie-Buttigieg race -- our kind of people! -- is the race the elite media wants us to have, rwegardless of what voters think.