Skip to content
Your right-wing relatives think of The New York Times an extremely liberal -- socialist! communist! -- news outlet, but in one way the Times is on exactly the same page as Fox News: Both despise teachers' unions in urban public schools. Here's a "straight news" Times story, written by Dana Goldstein and Noam Scheiber, that exudes contempt for unions, presenting their concerns about the current COVID surge as objectively unjustified and contrary to the public good:

Few American cities have labor politics as fraught as Chicago’s, where the nation’s third-largest school system shut down this week after the teachers’ union members refused to work in person, arguing that classrooms were unsafe amid the Omicron surge.

But in a number of other places, the tenuous labor peace that has allowed most schools to operate normally this year is in danger of collapsing.

While not yet threatening to walk off the job, unions are back at negotiating tables, pushing in some cases for a return to remote learning. They frequently cite understaffing because of illness, and shortages of rapid tests and medical-grade masks. Some teachers, in a rear-guard action, have staged sick outs.

Unions are "arguing" that Omicron makes classrooms unsafe. They "cite" understaffing and lack of tests and good masks. There's no acknowledgment, that, well, they might have a point. 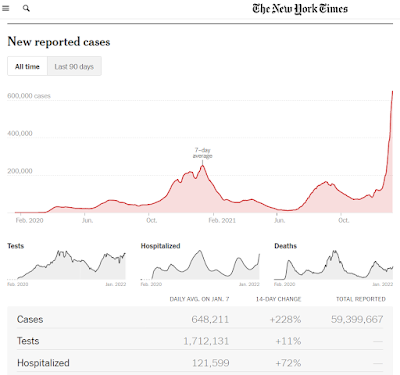 Just the opposite, in fact. Here's an astonishing paragraph from the Goldstein/Scheiber story:

The unions’ demands echo the ones they have made for nearly two years, despite all that has changed. There are now vaccines and the reassuring knowledge that in-school transmission of the virus has been limited. The Omicron variant, while highly contagious, appears to cause less severe illness than previous iterations of Covid-19.

Two months ago, a paragraph like this could have been justified, even though America was in the midst of a Delta wave. Now it's abhorrent. "All that has changed" since late November is that we have a massively contagious variant that, while it causes somewhat milder disease, is still filling up hospitals because the vaccines don't stop it altogether and "milder" is a relative term.

The point of the story is: Unreasonable union demands are coming to your community soon -- and not only are the union nutjobs dangerous to the cause of in-person learning at all costs, they might cost Democrats several elections in November.

... for Democrats, the revival of tensions over remote schooling is a distinctly unwelcome development.

Because they have close ties to the unions, Democrats are concerned that additional closures like those in Chicago could lead to a possible replay of the party’s recent loss in Virginia’s governor race. Polling showed that school disruptions were an important issue for swing voters who broke Republican — particularly suburban white women.

Let's take a closer look at the link on the word "Polling."

The link goes to a press release from a group called Democrats for Education Reform. It reads in part:

A new poll, jointly released today by Democrats for Education Reform (DFER) and Murmuration found that education was one of the primary issues voters considered when casting their ballots in the 2021 Virginia gubernatorial election. Republicans–with Democrats’ help—turned a natural Democratic advantage into a Republican strength by playing into parents’ frustrations.

Of voters who ranked education as a top issue (21% overall), a whopping 70% voted for Governor-elect Glenn Youngkin....

Among Republicans, in particular, protecting parental involvement was an especially resonant message (96%), while Biden voters noted concerns over prolonged school closures based on unions, not science, as the most resonant argument against Terry McAuliffe (28%).

"Among Republicans, in particular, protecting parental involvement was an especially resonant message" -- that would seem more of a reference to the curriculum wars that took place during the Virginia gubernatorial campaign, and to Terry McAuliffe's poorly worded assertion “I don’t think parents should be telling schools what they should teach.”

And what should we take away from this?

Biden voters noted concerns over prolonged school closures based on unions, not science, as the most resonant argument against Terry McAuliffe (28%).

"Based on unions, not science" doesn't seem like the bland, objective wording you expect in a responsibly worded poll. And, in fact, if you look at one series of questions posed in this survey, you see that this is effectively a push poll.

Q14. Here are some statements that you may have heard during the election. Regardless of who you voted for in the election for Governor, for each one please indicate whether you find that statement very convincing, somewhat convincing, not too convincing, or not at all convincing as a reason to have voted for Glenn Youngkin or oppose Terry McAuliffe.

Q14A. [SCHOOL CHOICE] Glenn Youngkin says he will launch 20 new innovative charter schools to give parents more choices in their kids’ education. He says McAuliffe would block any school option other than any public school because he believes government officials know better than parents how to educate their children.

Q14B. [STANDARDS/REWARD TEACHERS] Youngkin says we have to go to work for our kids. He'll invest more in schools, raise teacher pay, and demand better performance from our schools.

Q14C. [PARENTS - MCAULIFFE] As Governor, McAuliffe pushed left liberal activists into Virginia schools while shutting parents out of the conversation on school curricula, saying "I don't think parents should be telling schools what to teach."

Q14D. [CRT] Glenn Youngkin says our school curricula have gone haywire. He’ll ban dangerous education programs that teach kids the only thing that matters is their skin color and that all white people are racists, while Terry McAuliffe would support the activists and bureaucrats pushing them.

Q14E. [CLOSURES W/ UNIONS] Despite CDC guidelines about safe school re-openings, Terry McAuliffe and other Democrats sided with teacher’s unions instead of scientists and kept schools closed for in-person learning for too long. Glenn Youngkin will follow the science and oppose unnecessary shutdowns.

Q14F. [CLOSURES W/ LIBERALS] Despite CDC guidelines about safe school re-openings, Terry McAuliffe and other Democrats sided with liberal activists instead of scientists and kept schools closed for in-person learning for too long. Glenn Youngkin will follow the science and oppose unnecessary shutdowns.

Q14G. [PARENTS - CHOICE] Youngkin says parents have a right to make decisions about their children's education, and he will always stand up for Virginia parents.

Every one of these statements is pure propaganda. As a rule, push polls are conducted before an election, in order to push a candidate's talking points on the public in the guise of polling, but this one appears to have been conducted after the fact, presumably in order to generate public support for right-leaning education "reform."

But why would a group called Democrats for Education Reform order up a poll like this? Well, you should take the word "Democrats" with a grain of salt. Ballotpedia explains:

DFER was founded in 2007 by a number of New York hedge fund managers, including Whitney Tilson, R. Boykin Curry IV, and John Petry. The group was founded as an alternative to the more mainstream Democratic Party positions on changes in the education system. According to Philanthropy Roundtable, the group started as a "lobbying, funding and advocacy group that plans to challenge the entrenched party power of teachers’ unions and other education sector interests, who largely define the official Democratic position on education issues."

... The financial backing for DFER has been a source of opposition from other education advocates. DFER's funding largely comes from private interests. Diane Ravitch, a progressive education expert, has called DFER a "Wall Street hedge fund managers’ group." In 2013, the Democratic Party of California denounced the group, saying DFER "is funded by corporations, Republican operatives and wealthy individuals dedicated to privatization and anti-educator initiatives, and not grassroots democrats or classroom educators."

There's other polling cited in the piece that's a smidge more plausible, though in one case it's GOP polling and in another case it's a focus group conducted for another group of right-centrist Democrats, Third Way. But the DFER polling should never have been cited.

Meanwhile, what's actually happening in schools seems a lot closer to the unions' characterization than to the Goldstein and Scheiber's:

2/ a bit more context here. there are obviously lots of different issues in terms of health for students, for teachers, staff. but one point that gets less attn in the public conversation is that for most of the schools in nyc right now most of what they’re doing is doing …

4/ for schools to remain open if possible but keeping them open under these circumstances is basically doing so on principle because politicians and COVID policy influencers have decided schools must never ever close no matter what and no matter show short a period of time.


But don't you dare close the schools, even briefly, because hedge fund managers whose ultimate goal is to abolish unionized public education in big cities wouldn't like that.