Skip to content
Hi, I'm back -- thank you, Yas and Tom, for some terrific work while I was away.

While I was gone, global health officials announced the emergence of a frightening new COVID variant, now named Omicron, that might cause reinfections and evade vaccines (though a great deal is still unknown). Surprisingly, most of the right-wing press has decided that this variant is genuinely bad (but I guess it's because saying so makes President Biden look bad). So Gateway Pundit reports the variant under the headline "New COVID Virus Variant Identified in Africa Is 'Highly Transmissible and Vaccine-Resistant.'" In fact, we don't know how vaccine-resistant it is, and won't know for several weeks, but GP is treating it as a real and dangerous virus.

The commenters? Not so much:

It 'could be' a new variant OR nothing at all. It may, and most likely is (given the "the Great Reset" every westernized nation is trying to institute) just a red herring to try and get everyone to lock down again and make the final push to collapse the economy. People have been fighting back all over the globe and so they NEED a "new variant" that sounds even deadlier to try and scare everyone into submission.... But IF it is an actual variant, it's less deadly (even if it 'transmits easier' than the original strain) to anyone with NATURAL IMMUNITY as every virus gets WEAKER as it mutates. Now, for anyone with the vaccine....each new variant will be more deadly thanks to the spike factories they injected into themselves, not because the variant is stronger (It's NOT). They signed their death warrants by taking the vaccines & boosters. Let's hope people the world over are not going to fall for the "new variant" ruse this time. All they want to do is take our FREEDOM. Period. All one needs to prove this is look at Australia. That's all this COVID nonsense has been about from the beginning, when the CCP & Fauci released this on the world. Side note: Africa has had the LOWEST COVID CASES IN THE WORLD!! They have been regularly taking HCQ & IVERMECTIN against malaria and other parasites. These drugs also happen to be the only known CURES for COVID! So now the media & elites are trying to make Africa look like a COVID hotbed to trick people into their nefarious plans.

That's a pretty good one-paragraph compendium of nearly every popular COVID conspiracy theory on the right. In case you didn't know, "The Great Reset" was the theme of the 2020 Davos conference, and it's now become shorthand on the conspiratorialist right for the belief, as one summary of the belief put it, that "the global elite’s plan" is "to instate a communist world order by abolishing private property while using COVID-19 to solve overpopulation and enslaving what remains of humanity with vaccines."

More from the GP comments:

COVID and all its supposed variations are Satan's way of trying to kill off the world's population in these Last Days.

Satan has many slaves in BigPharma and politics who sold him their souls for big bucks.

Matthew 24:7For nation shall rise against nation, and kingdom against kingdom: and there shall be famines, and pestilences, and earthquakes, in divers places.

Correct me if I'm wrong, But Didn't I just Read an Article about the Low cases in Africa. Germ Warfare since?

I have an ample supply of Ivermectin on hand to treat my whole family. The Progressives will never be able to understand how the gene therapies falsely called 'vaccines' actually CAUSE other variants to evolve, while simultaneously severely weakening the bodies Immune Response. These Gene Therapies are a death spiral.

And because some scientists believe that the new variant might have developed in an immunocompromised, HIV-positive person, we get this:

"The variant may have come from someone with AIDS".

Hmmm. Who is a driving force behind the COVID debacle and the AIDS debacle?

Why it's "Dr." Anthony Fauci, of course! How interesting!

It may be a stretch to include Dr. Judy Mitowitz’s claim that most vaccines are already infected with the HIV virus in the labs, but we know for sure this variant is. Something sinister will come from the fact that an active HIV/AIDS patient was the first person detected with the new variant. How do we know that HIV/AIDS isn’t the cause of the mutation?

(I'm aware of Judy Mitkovits, one of the most dangerous -- and successful -- anti-vaccine conspiracy theorists out there. If she has the crackpot belief that HIV is in most vaccines, it's news to me, but I wouldn't be surprised.)

Predictable. The people are weary of this scam. They needed a new threat to continue control and for an excuse as to why the Jab is not working. If this were a movie, you'd walk out due to lack of believability. When they start off by yelling 'cases' as opposed to hospitalizations and deaths, and statistics, you have cause for doubt.

The vaccine destroys your immune system. Every booster will make you die sooner.

Must be keeping the Smallpox in reserve??

There is NO variant.. only scare tactics to get more injected. A bio-engineered spike protein, (Dr. Francis Boyle) cannot change into a virus. In any case. according to WHO Jan 2021, the PCR test is meaningless, as it only confirms the presence of a strand of Flu or He.p.DNA, so how do they know somebody is infected? Greg Hunter USAWatchdog dot com. Dr. Elisabeth Eads, “Video: Covid-19 Injections Will Cause Massive Deaths”, where Dr. Eads not only points out that the PCR tests false positives are an estimated 97%, but also lays bare the real death count related to the Covid vaxxes.

That brings up a good question: How do you flush out the spike proteins if you have a bad reaction to the shot? What is the antidote to the COVID shot?

I heard Pine Needle Tea. U can buy it on-line.

And in response to a tweet from right-wing talk radio host Buck Sexton, someone with a Pepe the Frog avatar posts this: 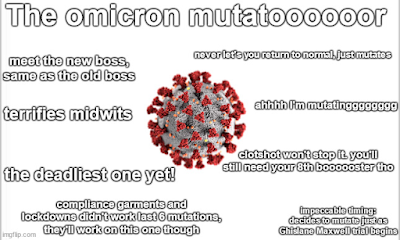 And there's this, as you'd expect: 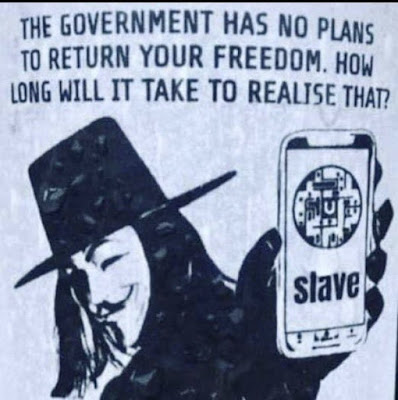 I suppose most people on the right will manage the doublethink (Biden is president and the pandemic is getting worse, even though the pandemic is a hoax), but it might get harder. I think Stephen Miller is preaching to the wrong crowd:

Miller: If President Trump was still in office, we’d already have modified vaccines to deal with the new variants pic.twitter.com/4WxhjACWFI


He's claiming that a reelected Trump would already have a vaccines ready to deploy now for a variant that wasn't publicly identified until this week, but the Fox audience doesn't believe that COVID is terribly dangerous (at least to rock-ribbed Real Americans with rootin'-tootin' immune systems) and does believe that the vaccines are dangerous. Old conspiratorial habits of mind die hard.