The percentage of Americans who say violent action against the government is justified at times stands at 34 percent, which is considerably higher than in past polls by The Post or other major news organizations dating back more than two decades. Again, the view is partisan: The new survey finds 40 percent of Republicans, 41 percent of independents and 23 percent of Democrats saying violence is sometimes justified.

The view is partisan, but a lot more Republicans share it.

As noted, this question has been asked in other polls over the years, with much less support for violence:

The wording of the question is "Do you think it is ever justified for citizens to take violent action against the government, or is it never justified?" When CBS asked the same question in 2011, the partisan breakdown was as follows:

Republicans were much readier for anti-government violence then, too. But to be sure of the pattern, we'd need to see the numbers if the question were asked during a Republican presidency. For some reason, it appears that it's been asked only when a Democrat is in the White House.

In the current poll, respondents who said anti-government violence could sometimes be justified were asked to name circumstances when that would be the case. For the most part, the answers seem ... not unreasonable. 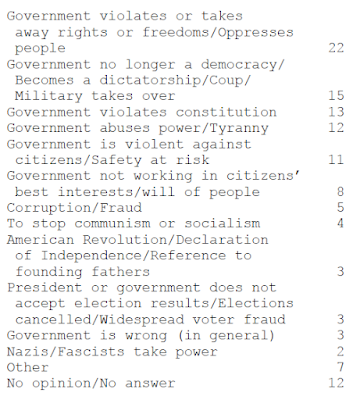 When the question was asked in that 2011 CBS poll, there was some pushback from the left as well as the right. At National Review, Daniel Foster wrote:

... what does surprise me is that 76 percent of respondents, including 64 percent of Republicans, think it is never right to take up arms against the government. Ever.

What about if the government canceled the next election and started seizing first-born; or arbitrarily disappearing whole classes of citizenry; or summarily abolished private property and confiscated all our belongings at the tip of a bayonet? Not even then? Gosh, even Hobbes thought you had a right to violently resist a state that was trying to kill you.

While Robert Farley wrote this at Lawyers, Guns & Money:

... I can’t even imagine answering “No” to such a categorical question; there are obviously a number of situations in which I would consider anti-government violence justified. The United States government (like every government) functions through the implicit threat of violence. It is often unjust to and brutally unrepresentative of the interests of the disadvantaged. I think that if the question were asked again of liberals, but framed in the context of something like the Wounded Knee Incident, the answer might be quite different.

I think the overall numbers are higher than they've been in the recent past because more Americans now can imagine a government that's truly oppressive or anti-democratic -- in the new poll, generally speaking, respondents aren't saying that the government should be overthrown merely because it's not to their taste.

On the other hand, I think Republicans have been more accepting of the idea of anti-government violence because they're told every day by their favorite media outlets that they're on the verge of being victims of government repression. They think there's already been a coup that overthrew the results of a legitimate election. They think the government is already socialist.

So I'd say that Americans support violence against the government for mostly legitimate reasons -- but Republicans, despite being members of the party that's far more likely to turn America post-democratic, are more likely to believe that their subjugation is imminent.