Skip to content
Bari Weiss has pondered this month's mass shootings in America, and you will not be surprised to learn that she thinks "we" are the problem.

I read these headlines and I think about how people grow accustomed to horrific things. How, not so long ago, people watched other people get drawn and quartered in the public square. They watched beheadings. They participated in honor killings. I think about things that, in other times, in other places, perhaps seemed perfectly normal to the people who witnessed them—and that still remain normal in parts of the world today. We look at such practices from our civilized perch and wonder how human beings ever did this to one another. How did they witness such barbarism and still have the appetite for dinner?

How have we normalized the fact that innocent people in this country can step onto a subway car or go to a grocery store or a synagogue or a church or a concert or a baseball game or a party or a car show or to work and maybe they will just be gunned down? How have we gotten accustomed to—let’s call it what it is—child sacrifice?

Who is "we"? The reactions I've seen to both the Buffalo and Uvalde shootings has been equal parts grief and outrage. I don't know anyone who's "accustomed to" this, in the sense of finding it acceptable. Inevitable, yes. But that isn't the same as watching "people get drawn and quartered in the public square" with delight. (I see that Weiss doesn't mention the gleeful American audiences for lynchings -- she wouldn't want to write anything that reads like critical race theory, I guess.)

We're not numb to all this. We feel powerless. Republican gun absolutists have a stranglehold over firearm policy nationwide and in most states. Guns flow freely across state borders even into states that try to regulate them. Interventions such as red flag laws are implemented half-heartedly and with an indifference to the possible consequences of failure. Most of us have no ability to participate in any of these processes. We vote, we give money to organizations that try to change law and policy, and nothing changes. I don't think this is comprehensible to Weiss, who has been a prominent media figure for years. She's influential. We're not. Nobody cares what we think. We live with this not because it doesn't bother us, but because we don't have any other options.

There is a deep sickness in this country. It goes beyond our addiction to guns. It’s an anti-social, anti-human disease that has gripped our society and our politics.

A big part of that disease is how numb we have become to violence. The country has been experiencing the largest crime surge in decades. Armed robberies are up. Shoplifting is up. Road deaths are up. Car break-ins are so common in some cities that people leave notes on their windows to the thieves that nothing is inside.

But the most devastating rise has been in murders. Since the FBI started tracking the data, 2020 marked the highest single-year increase in homicides. In 2021, it went up again.

As of 2020, the leading cause of death among children in America is guns. Not cars. Not drugs. Guns. It was also the year that we had the highest rate of gun sales in American history.

And while Weiss is critical of gun-absolutist defenses of the status quo ("mentally ill people getting their hands on guns to commit mass murder this easily is deranged and wrong.... There’s nothing well-regulated about Salvador Ramos, though it appears he bought those assault rifles legally on his 18th birthday"), the problem is really us.

... The social rot that’s come over America, the nihilism and hatred of each other, is part of the cause here. The dissolution of our social ties—and with them the accountability and responsibility that an actual community demands—has allowed insanity to fester unnoticed. Lockdowns accelerated the isolation, the purposelessness, the lack of meaning that was already overcoming us.

If we insist on viewing this shooting as part of some isolated issue or species of violence, then we miss the point. The point is the country is being consumed by what Philip Roth famously called “the indigenous American berserk.” It stretches back many decades, or longer, and for ages, it was possible to ignore or compartmentalize. Now the brokenness is everywhere we look and it is impossible to unsee it.

So is this contemporary, something that's "come over America" and "gripped our society" in recent years, or is it something that "stretches back many decades, or longer," because, as Roth says, it's "indigenous"?

Here's the trend line for violent crime in America: 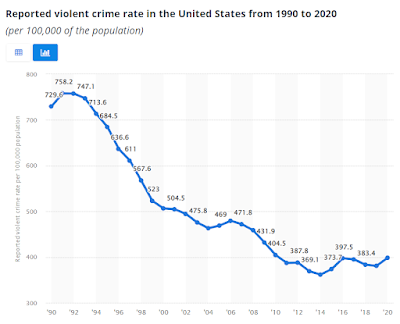 The crime drop continued into the early 2010s -- but Gabby Giffords and 20 other people were shot in Tucson in 2011 (6 died). Sandy Hook and the Aurora movie theater shooting were in 2012. The Umpqua Community College shooting (10 dead) was in 2015. And so on. (I'm reading from this list of U.S. mass shootings.) If Weiss wants to blame some recent breakdown in the social order -- possibly stemming from pandemic lockdowns -- for Buffalo and Uvalde, then what caused those shootings? And if the "berserk" is just in our nature, as Roth says, how did we get crime to drop between the 1990s and 2010s?

Violent crime is up now -- it's still significantly lower than at its peak three decades ago, but it's up. I blame the guns, and the gun culture, or cultures -- the various subcultures of America wherein guns aren't seen as dangerous, or dangerous yet necessary, but rather as awesome. You can't blame dangerous people for resorting to guns when respected community figures say they're a good thing. Inner-city gang leaders send this message, but so do community leaders and prominent political figures in red America. And so do anonymous peers on white supremacist message boards. But the worst of these are the red stae community leaders who valorize guns, because they claim to represent America's core values. Peoplke in much of America don't worry about selling two assault weapons to a young man on his eighteenth birthday because they believe assault weapons are very good things. And the rest of us can't do a goddamn thing about that.