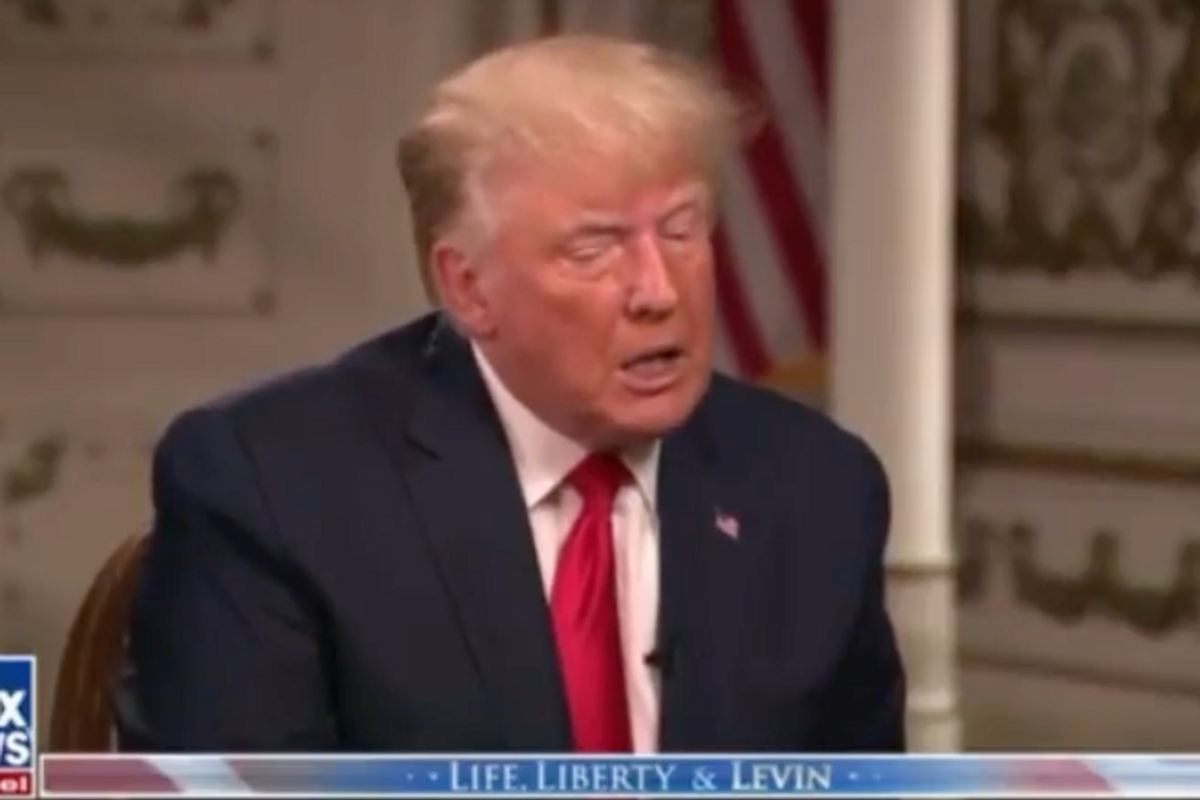 Love the smell of obstruction of justice in the morning!

Once again, Donald Trump has taken to the airwaves to confirm that he fired FBI Director James Comey four years ago to put an end to the investigation into Russian election interference. Just in case there was anyone who doubted it.

Trump: Don\u2019t forget, I fired Comey. Had I not fired Comey, you might not be talking to me right now about a beautiful book about four years in the White House and we\u2019ll see about the future.pic.twitter.com/5hL9RfFaA6
— Acyn (@Acyn) 1638754540

“Don’t forget, I fired Comey, had I not fired Comey you might not be talking about a beautiful book about four years in the White House, and we’ll see about the future, the future's going to be very interesting.” the former president told Fox News's Mark Levin, hawking his $75 White House photo album — or $229 for a signed copy your family will cherish forever CALL NOW!

"I fired Comey, that whole group, and now that group is coming back again?" he babbled. "I mean, it's not believable. It shouldn't be allowed to happen."

Did President Joe Biden fire Chris Wray and put James Comey back in charge of the FBI? What the hell is that old fool talking about?

In case that whole insane week in May 2017 isn't seared into your memory forever, Deputy Attorney General Rod Rosenstein cooked up a memo saying Comey had to go because he was too mean to Hillary Clinton. This came after Trump and his dipshit courtiers Stephen Miller and Jared Kushner drafted a "You're Fired" letter explicitly linking the dismissal to the Russia investigation, and White House Counsel Don McGahn lost his shit and told them to shut the hell up about it.

But Trump immediately undercut Rosenstein's post hoc justification by making a beeline for ABC's Lester Holt to explain that actually the dismissal was an attempt to undercut the Russia inquiry.

“In fact, when I decided to just do it, I said to myself, I said, ‘You know, this Russia thing with Trump and Russia is a made-up story, it’s an excuse by the Democrats for having lost an election that they should have won,'" he boasted.

So it's not exactly a surprise that Trump is admitting once again, in case anyone forgot, that he fired James Comey to obstruct justice. Or as that asshole put it after an extended fulmination to Levin on the supposed Deep State, "If I didn’t fire Comey, they were looking to take down the President of the United States if I didn’t fire him. And some people said, 'He made a mistake when he fired Comey.' And now those same people said it was the most incredible, instinctual move that they've ever seen.'"

Great big men come up to him with tears in their eyes and say this all the time! They even call him "sir!"

Here on Planet Earth, if Trump hadn't fired Comey, he wouldn't have wound up with Robert Mueller being appointed special counsel and sticking his hand all the way up the ass end of Trumpland. Not for nothing, but the entire second volume of the Mueller Report was a detailed examination of the eleventy-seven ways Trump and his minions tried to obstruct the investigation. The entire administration was engulfed in this thing for two straight years, so if firing Comey was an "incredible, instinctual move," then Trump has all but admitted his instincts suck.

Which we already knew, because it gave us something to focus our rage on between 2017 and 2019 when Nancy Pelosi took back that speaker's gavel and we knew we were in the home stretch of that four-year nightmare.

But now it is 2021, and we are desperately trying to hang on to our majorities in the House and Senate. Democrats are trying to pass once-in-a-generation legislation to help people. We are literally giving people money — and not rich assholes who don't need it. So perhaps THE MOVE right now is not to work ourselves into a Merrick Comin' frenzy and demand that the Justice Department indict Trump for obstruction of justice based on his public admission of doing just that.

And perhaps the DOJ is investigating Trump for obstruction. Hell, it's all laid out in the Mueller Report where Mueller said he didn't think he could indict a sitting president, but handed them the evidence tied up in a neat bow should Congress decide to do its damn job (LOL). But as Marcy Wheeler points out, grand juries are secret, and we might not hear about a pending Trump indictment until right before it dropped.

Don't hold your breath, though, and don't waste it fighting yesterday's war. Because Mueller didn't save us. We saved ourselves, and we have to continue saving ourselves every damn day because the fascists are at the gate. So, yeah, we're all in favor of an obstruction indictment for Trump — if anyone earned it, it's that guy.

But also HOLY SHIT we're less than a year out from the midterms and we're clearly not going to pass voting rights legislation before then. In the meantime, the January 6 Select Committee is going balls to the wall to get to the bottom of that attempted coup. So, yeah, LOCK HIM UP for sure. And also, figure out what you can do to support congressional Democrats as they run into the 2022 wind.