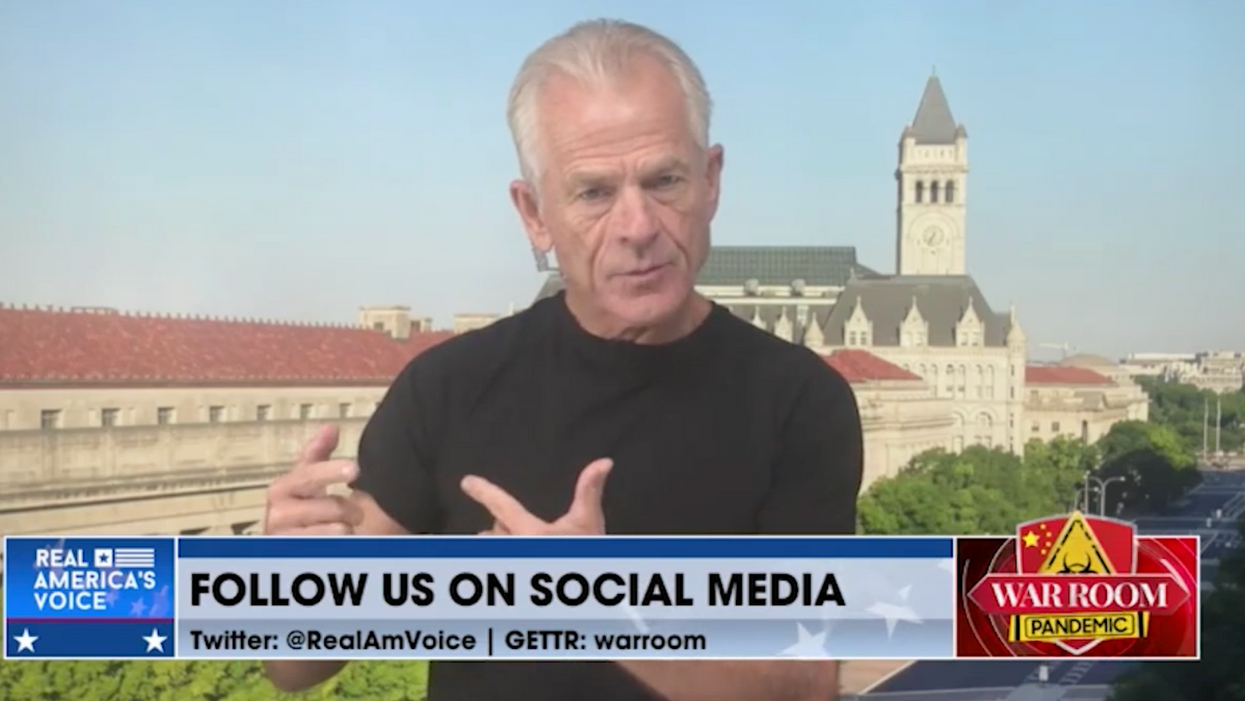 Peter Navarro, a crank economist plucked from obscurity after Jared Kushner Googled "China + GRRRR + ARRRRGHH" (more or less), will not go the hell away. A normal person would slink off into obscurity after spearheading a plan to have the states bid against each other for ventilators in a global pandemic and saddling the federal government with 63 million of doses of unneeded hydroxychloroquine. But Peter Navarro is not a normal person. We're talking about a guy who used an anagram of his own name as a source for pithy witticisms praising his own logic in six books.

So it's probably no surprise that Navarro is still lurking around trying to sell himself as an expert on literally everything, from geopolitics to virology. Here he is back on Steve Bannon's podcast to sell his bullshit about Dr. Anthony Fauci belonging "in an orange jumpsuit" and Joe Biden caving to China by, umm, leaving Donald Trump's tariffs in place.


Before we get into the craziness, can we just ask what the hell Peter Navarro is wearing? Why is he always in short sleeves now? He wants to be taken seriously as a VRY SRS academic expert on all the things, but now that he's divorced, is he just trying to let us know he's majorly yoked, bro? Even in California (or in front of a green screen), it's still November.

Media Matters flagged the interview and provided us with the transcript (BLESS!) in which "Doctor" Navarro explained that the Covid vaccine a billion people already got jabbed with is actually NOT REAL.

After insisting that "we now know the virus came from the Wuhan Bioweapons Lab and was paid for by Tony Fauci," the economist wondered, "Why isn't every country around the world demanding that China come clean?"

Pretty sure if there were a place called the "Wuhan Bioweapons Lab" and Dr. Fauci were writing checks to it, we'd have heard about it by now. But Peter Navarro ain't no square — just look at his T-shirt, man — and he's not going to be bound by The Man and his demand to conform to objective reality about US government funding for legitimate research at the Wuhan Institute of Virology.

NAVARRO: And why is that important?

Okay, weirdo, tell us why this insane shit you made up is important.

NAVARRO: Steve, if Fauci and the Chinese had told us what that genome was that they had genetically engineered in January 2020, we'd have a real vaccine.

What the everloving fuck is he talking about? The COVID-19 genome was first sequenced over a year ago, with over a million different submissions since documenting its continuing mutation. But more to the point, he thinks Fauci deliberately cooked up a plague? Seriously?

NAVARRO: As you point out, the vaccine we have is not a vaccine. It's an experimental RNA technology designed to provoke an immune response. It doesn't do it very well, and it's risky. A real vaccine is what you get for, like, smallpox and polio. We don't have that.

Let us stipulate the Your Wonkette is not qualified to speak on the efficacy of RNA vaccines versus traditional live virus shots. But neither is that bloody quack Peter Navarro!

But you know who can speak on this with authority? The CDC.

Why is Peter Navarro knocking the only thing the Trump administration got right in four years? Is he that committed to being wrong all the time about everything that he can't let the bit go? Or is that just the ivermectin-hydroxy smoothie talking? You know, allegedly?

You dumb Sh*T tony. It's called hydroxychloroquine and ivermectin. You have some much blood on your hands you must slip getting into the bath tub.\n\nFauci floats pill to 'knock out' COVID early http://a.msn.com/05/en-us/AAMTOvj?ocid=st\u00a0\u2026
— Peter Navarro (@Peter Navarro) 1628104683

Drink up, kids, and one day you can be swole like Ron Vara.