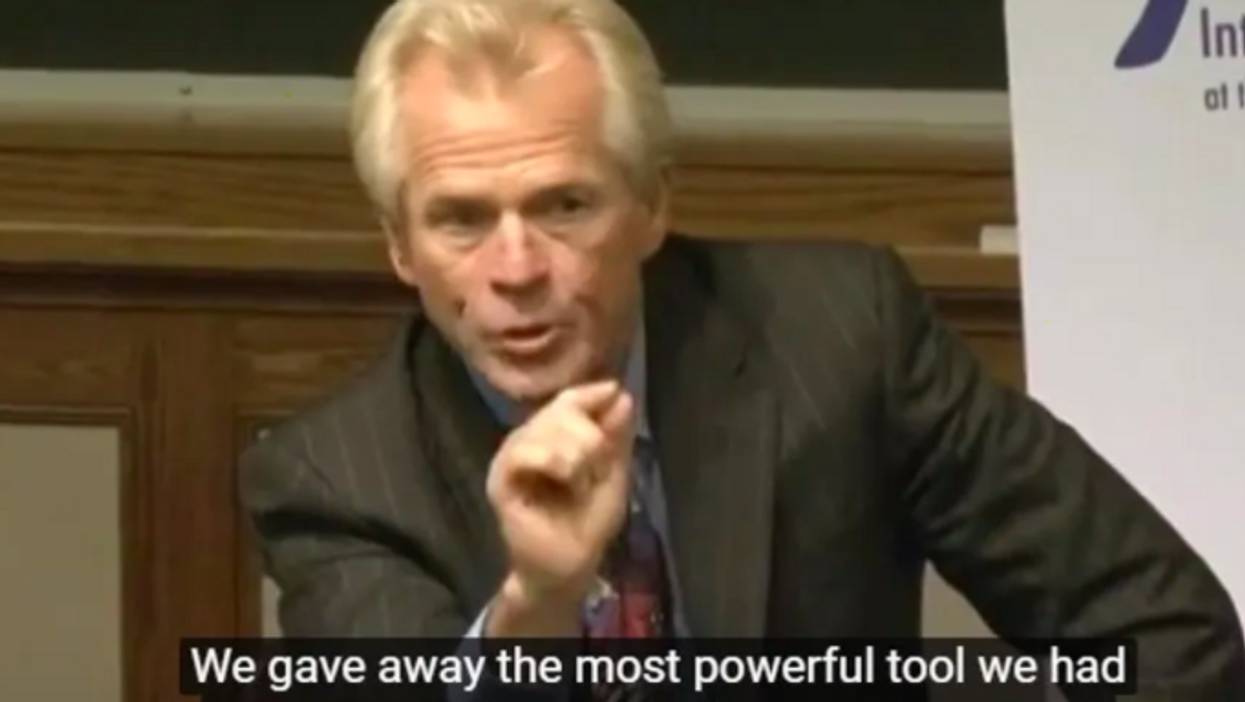 Peter Navarro's most recent book, In Trump Time, isn't exactly burning up the charts. In fact, Amazon is currently offering the Kindle edition for all of $2.99. So perhaps the former Trump economics adviser was just grateful to Daily Beast reporter Jose Pagliery for actually reading the thing and thus agreed to an interview. But whatever the explanation, that blabbermouth has dropped his buddies Sen. Ted Cruz and Rep. Paul Gosar in the shit.

“We spent a lot of time lining up over 100 congressmen, including some senators. It started out perfectly. At 1 p.m., Gosar and Cruz did exactly what was expected of them,” he blabbed to the Beast. “It was a perfect plan. And it all predicated on peace and calm on Capitol Hill. We didn’t even need any protestors, because we had over 100 congressmen committed to it.”

Navarro recently blew off the House Coronavirus Select Committee, asserting executive privilege in a letter he apparently drafted without the aid of a lawyer. If there was a case to be made that his backroom negotiations to saddle the government with 63 million doses of hydroxycholoroquine were covered by privilege, his yapping about it in the aforementioned book probably waived it.

Similarly, the on-the-record interviews boasting about his plan to overturn the election results will make it exceedingly difficult to claim privilege when the House January 6 Select Committee inevitably gets around to subpoenaing him.

The plan, cahootsed up with moldering podcaster Steve Bannon and given the name "Green Bay Sweep," was to use the allotted two hours of debate time in each house of Congress for every "contested" state, amping up pressure on Vice President Mike Pence to reject electors.

“The Green Bay Sweep was very well thought out. It was designed to get us 24 hours of televised hearings,” Navarro told The Beast. “But we thought that we could bypass the corporate media by getting this stuff televised.”

Because somehow the problem was that the media wasn't covering their nonsensical claims of electoral fraud, not that they were patently ridiculous and had failed in every court in the land. NEEDZ MOAR Four Seasons Total Landscaping and Italian Space Lasers!

Navarro told Pagliery that he worked up three reports for the White House with titles such as "Immaculate Deception" and "Art of the Steal." Which certainly seems like campaign work performed using government resources, but which should anyway be in possession of the National Archives, to be turned over forthwith once Trump's lawsuit runs its course.

And he seemed entirely confident that the January 6 Committee would not subpoena him.

“They don’t want any part of me. I exonerate Trump and Bannon,” he bragged, on the theory that the plan for 24 hours of breathless television coverage of their fantastical fraud claims were only thwarted because a few ne'er-do-wells took an unauthorized tour of the halls of Congress.

Of course, this is the guy who talked Trump into levying disastrous tariffs on China because "trade wars are good and easy to win." So Cruz and Gosar's mileage may vary.

Never mind that Trump summoned the mob to DC, saying, "Be there, should be wild," and Bannon promised on January 5 that "all hell is going to break loose tomorrow."

And not for nothing, but the Select Committee already wrote off Bannon's testimony when they referred him for criminal prosecution. They know they're not getting him under oath, so there's nothing to "exonerate." But if Navarro thinks the best way to play this one is to forego the advice of counsel and dummy up a "You ain't mah daddy!" letter on his own account, who are we to complain?