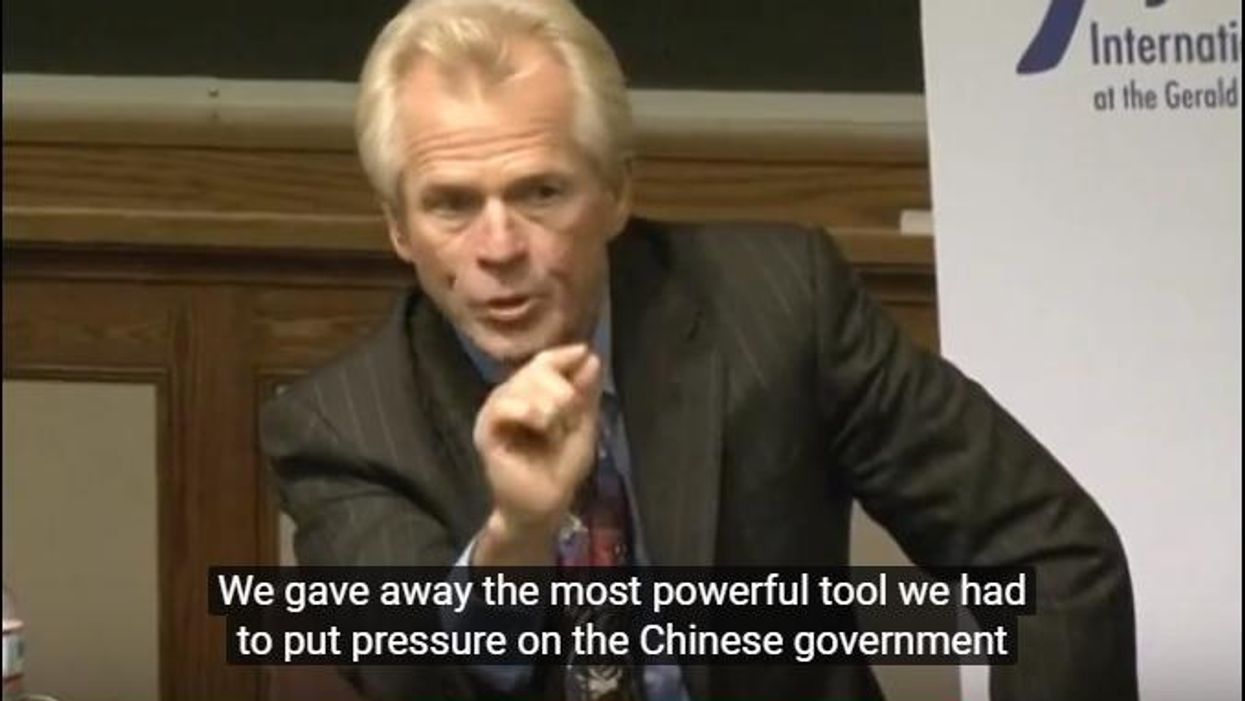 “Said the Boss, ‘I’m taking down all flights coming into the US from China. It’ll rattle the markets and Biden and the Left will hit me hard. But this virus looks like it might be bad, and we need to do it. So get that Task Force behind me. Be tough. You’re my tough guy.’” — White House econ loon Peter Navarro, in his recent book In Trump Time: A Journal of America's Plague Year.

Raise your hand if you believe that really happened. And then slap yourself upside the head, you gullible sap.

No, we did not buy that wacko's stupid book. It was quoted in Democratic Rep. James Clyburn's December 11 response to Navarro's refusal to testify to the Select Subcommittee on the Coronavirus Crisis, which Clyburn chairs.

On December 7, Navarro wrote to Rep. Clyburn, whom he referred to as "Representative Rayburn," purporting to assert executive privilege over the subpoenaed documents and testimony. Navarro, who routinely cited an anagram of his own name as a source in his anti-China screeds, appears to have drafted this letter all by himself.

Not only is this a direct, proper, and explicit invocation of the executive privilege provided by a President of the United States as it relates to an important policy matter during his tenure in office. It is a direct order that I should not comply with the Subpoena based on the aforementioned Subpoena. [sic]

Therefore, until such time as the scope of the privilege is negotiated or negotiated, this matter is out of my hands and something the Subcommittee should discuss with President Trump's counsel.

That is not, in fact, "a direct, proper, and explicit invocation of the executive privilege" that would entitle Navarro to "not comply with the Subpoena based on the aforementioned subpoena." And if you, too, are thinking of telling Congress to get fucked without the advice of counsel, think again.

Particularly think again if that invocation rests on a fake MyFace Tweet from a former president railing about "the Communist Democrats [...] engaging in yet another Witch Hunt, this time going after my Administration’s unprecedented and incredible coronavirus response," and shouting that "I’m telling Peter Navarro to protect executive privilege and not let these unhinged Democrats discredit our great accomplishments."

At this point in the discussion, everyone reading this post knows that is not how any of this works. You can't just shout PRIVILEGE and run away laughing; you have to show up and assert the privilege in response to specific questions, and you have to present a privilege log disclosing any documents you have that are responsive to subpoena. Hell, even Steve Bannon was smart enough to get a lawyer to dummy up a letter for the January 6 committee saying his client couldn't possibly, preserving his right to assert an "advice of counsel" defense at trial, i.e. Bannon will argue that he had a reasonable belief that stiff-arming Congress was not against the law. Navarro didn't even leave himself that option if and when the Committee votes to hold him in contempt of Congress.

Moreover, as Chair Clyburn points out, Navarro spent the past year flapping his yap about Big Daddy Trump's bigly amazing coronavirus response, spilling the details of multiple Oval Office meetings in his own book, so the privilege has probably been waived.

And even if a blog post were a valid assertion of privilege regarding Navarro's conversations with Trump — which it is not — the subcommittee asked about several topics that are quite clearly outside any plausible claim of privilege. To wit, they want to know who Navarro was talking to about government business via non-government channels, and what he has done to get those communications to the National Archives as required by the Presidential Records Act. In a September 14 letter, Clyburn noted that he's already got a whole bunch of those off-the-record comms, and they make it clear that Navarro knew shit was about to hit the fan with COVID when Trump was promising publicly that it would magically disappear by summer.

The Select Subcommittee has obtained more than 80 messages that you exchanged with other White House personnel through your ProtonMail account between February 2020 and January 2021 related to the federal government’s pandemic response. These messages include discussions and memoranda relating to the Trump Administration’s preparedness plans in the early weeks of the pandemic response, development of diagnostic testing and therapeutics, procurement of ventilators and PPE, and a call for a “surge” in Intensive Care Unit (ICU) capabilities in hospitals most likely to face large numbers of severe infections.

In case your brain shorted out about the time Trump basically suggested Americans stick a light bulb up their asses or drink bleach, here are a few posts on the shitshow debacle unleashed when Jared Kushner put a bunch of twenty-something MBAs on the nation's coronavirus problem. And here's a list of Navarro's greatest hits from the Trump COVID era, courtesy of Chair Clyburn:

Information obtained by the Select Subcommittee indicates that you were deeply involved in efforts to obtain supplies from private companies in response to the pandemic in the spring of 2020. For example, you exchanged emails with an executive from AirBoss Defense Group related to a $96 million contract for powered respirators that the company received from the Department of Homeland Security in April 2020. In another instance, you sent an email to the CEO of Phlow Corporation—which soon thereafter received a federal contract for up to $812 million—instructing your team to get the first-time government contractor “greenlit as soon as humanly possible” and to “move this puppy in Trump time.” A report by a Special Committee of the Eastman Kodak Company’s (Kodak) Board of Directors indicates that you also participated in telephone conversations with Kodak’s leadership about the company partnering with the federal government in responding to the coronavirus crisis—after which Kodak was promised a $765 million federal loan. These and other third-party communications that may remain in your possession cannot reasonably be cloaked under the veil of privilege.

Don't forget saddling the nation with 63 million of doses of hydroxybonermectin!

But Navarro has an answer for this and it is ... just kidding, he's still shouting PRIVILEGE and sticking both middle fingers in the air.

Which is a bold strategy, Cotton. Particularly since Rep. "Rayburn" seems in no mood for these antics.

Please be advised that if you do not appear for the deposition as scheduled and produce all responsive documents in your possession by December 15, 2021, the Select Subcommittee will interpret your actions as willful noncompliance with the subpoena.

Mess with the bull, you might get the horns.