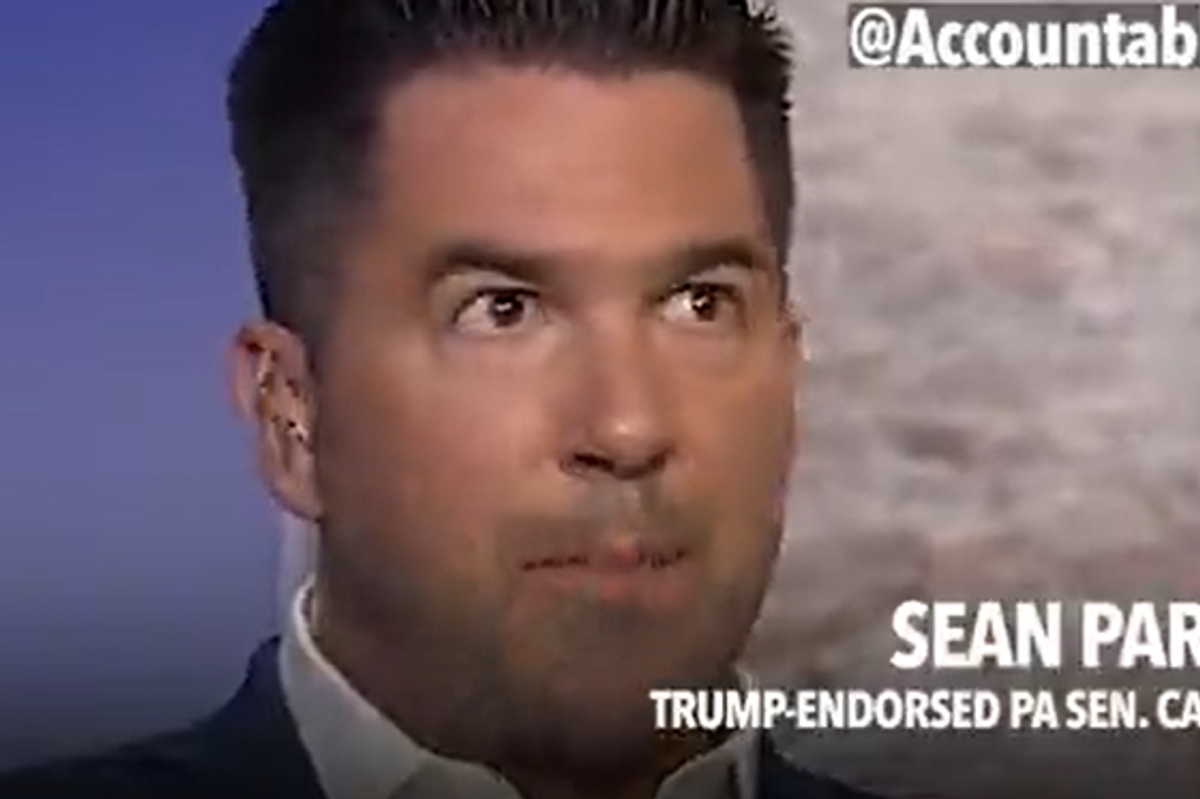 Sean Parnell is an absolute garbage human running for the US Senate seat in Pennsylvania being vacated by Republican Pat Toomey. Wonkette detailed the horrific domestic violence allegations against Parnell here, and he was in family court again yesterday regarding all that. Of course Donald Trump has endorsed him.

So yesterday, video of an interview Parnell gave on Fox Nation in 2019 started making the rounds and then going viral. We feel like we have seen some of these quotes already, but now that there is video, yikes hoo boy.

Who\u2019s gonna tell him?\n\n\u201cIt used to be, you know, women were attracted to your strength because you could defend them from dinosaurs.\u201dpic.twitter.com/fxiCJLeNWL

What is your favorite part? When he says "'happy wife, happy life' nonsense has done nothing but raise one generation of woman tyrants after the next"? When he refers to the "BS of a high-maintenance, narcissistic woman"? When he says, "The idea that a woman doesn't need a man to be successful, the idea that a woman could live a happy and fulfilling life without a man, I think it's all nonsense"?

Of course, there are all the parts where he says he's got "one failed marriage" so far, and that he hates all the "duck-billed selfies" from women on Instagram and oh yes, when he explains that TIME WAS when women loved a strong man because he could defend them from dinosaurs.

Guy is clearly a charmer.

By the way, this guy miiiiiight be the frontrunner so far? We have no idea, but it sure seems like the entire GOP primary up there in Pennsylvania is a shitshow, and this is the guy with the Trump endorsement, so sure why not.

In a Washington Post article published last night about Parnell's family court situation, there is this quote:

"Trump's team failed to do basic vetting on Parnell," said Scott Reed, a Republican consultant who ran political campaigns for the U.S. Chamber of Commerce for years. "And this is another example of a problem where they jumped into a race that jeopard­izes Republicans' ability to win in the fall."

Of course, Talking Points Memo has a thing today on just how normal this Parnell situation is for a man endorsed by Donald Trump, since Trump has such a habit of picking and surrounding himself with people who've been credibly accused of domestic violence and/or sexual harassment and/or sexual assault. Parnell ain't the only Trump endorsement this year so far who's got serious allegations against him. The Bulwark has another great thing on Parnell and the GOP's "class of 2022." Surprise, it's all about GOP guys who have been "accused of aggressively threatening and violating women."

As for Trump circle figures who are non-candidates — you dodged that bullet, New Hampshire! — we just got finished talking about what longtime Trump inner circle pal Corey Lewandowski reportedly pulled at a Benihana in Las Vegas with a Trump donor. Of course, when the leader of your party has been credibly accused of rape, sexual assault and harassment by dozens of women ...

But hey, maybe for Trumpers all of the accusations against Parnell are a feature, not a bug. Because TBH, it just seems like traditional Republican male toxic masculinity to us. Hasn't Josh Hawley been telling us all about how Republican men have to learn how to be manly again, and whining that the Left "define[s] traditional masculinity as toxic"? Isn't GOP Rep. Madison Cawthorn out there begging all the Aryan mommies to raise their little boys to be "monsters"?

How is Sean Parnell not the poster boy of traditional Republican masculinity? Just asking.

In other news, that dumbfuck Dr. Oz is reportedly getting into the PA Senate race as a Republican. You know, in case you were worried the primary wouldn't be stupid enough.

This is a pickup opportunity, Democrats. Let's not fuck it up.