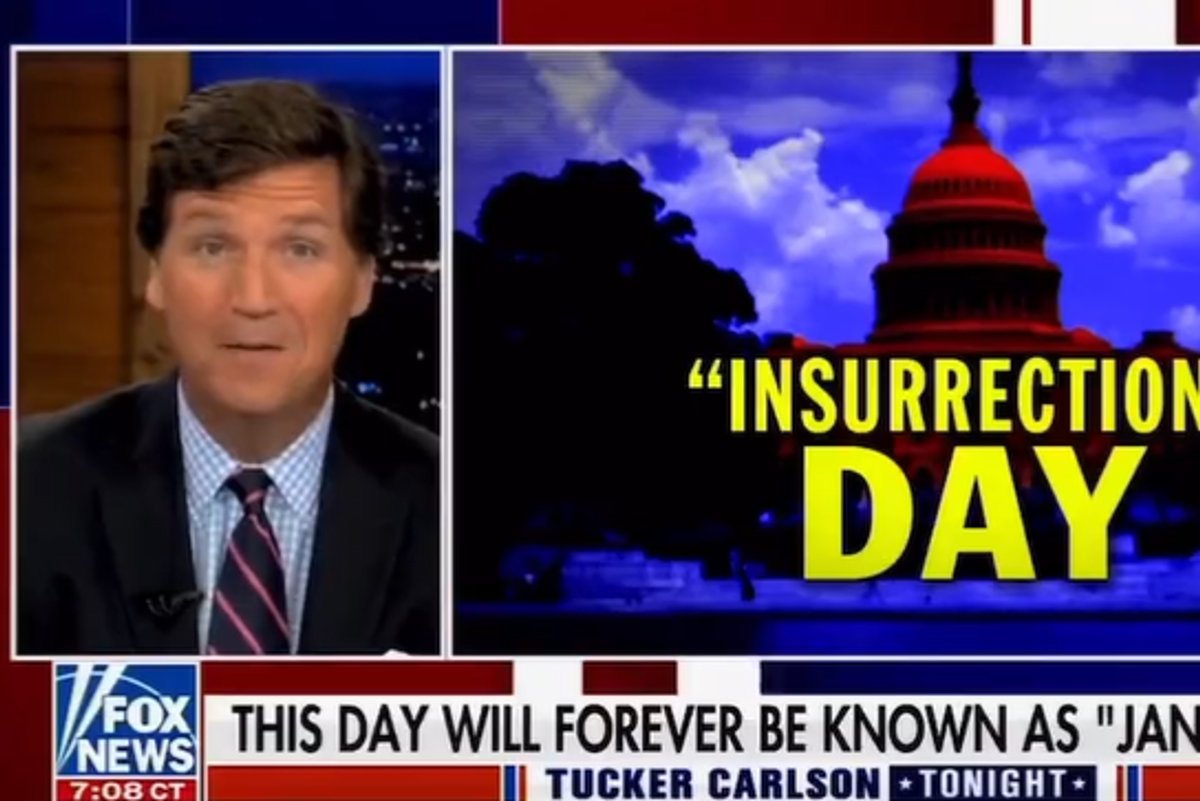 Here's a thing that happened on the eve of January 6. Not last year's January 6, we mean last night, the eve of today's anniversary. Ted Cruz, one of the seditionist senators who attempted to overthrow democracy from within the Capitol as the insurrectionist garbage attacked the building, actually for a brief second told the truth yesterday about what happened that day. He called the assault on the Capitol a "violent terrorist attack," which is unquestionably true.

In response, Tucker Carlson, the person who besides the very inciter of that terrorist attack has done the most to lie about what happened that day and defend the white supremacist fascists who committed the act, got SO LOL MAD about it last night.

We can give you some quotes, but believe us when we say you should just watch it, because every rage-squeak from Tucker is funnier than the last.

Ted Cruz has been getting hammered all day by MAGAs outraged by his speech today that J6 was a \u201cterrorist attack on the Capitol.\u201d It started this morning with Steve Bannon, and tonight here is Tucker attacking Ted.pic.twitter.com/jeqRV5MCcu
— Ron Filipkowski (@Ron Filipkowski) 1641432870

Tucker accused Republicans of "repeating the talking points that Merrick Garland has written for them" — these words, we guess — and played a clip of Cruz saying, "We are approaching a solemn anniversary this week [...] of a violent terrorist attack on the Capitol, where we saw the men and women of law enforcement demonstrate incredible courage, incredible bravery, risk their lives, to defend the men and women who serve in this Capitol." Obviously Cruz gets NO POINTS, NO CREDIT for saying that, as he was one of the original seditionists.

But oh my God, that set Tucker off. He said anyone who's conservative "appreciates Ted Cruz," even though people don't like him. (That made us laugh.) He said Cruz might be the "most articulate" person in the whole Congress, and that Cruz chooses every word very carefully. Tucker squealed, "He's a lawyer!" Therefore if Cruz said January 6 was a "violent terrorist attack," that's what Cruz meant to say.

And that's when the meltdown really began:

TUCKER: Of all the things that January 6 was, it was definitely not a violent terrorist attack.

TUCKER: It wasn't an insurrection.

TUCKER: Was it a riot? Sure!

You've got to listen to the clip to hear how high-pitched his chirping is.

TUCKER: It was not a violent terrorist attack!

TUCKER: So why are you telling us that it was, Ted Cruz? And why are none of your Republican friends, who are supposed to be representing us and all the people who have been arrested during this purge, saying anything? What the hell is going on here? You're making us think maybe the Republican Party is as worthless as we suspected it was. That can't be true, reassure us, Ted Cruz!

OK, so that whole part was hilarious, as his voice got higher and higher and higher. But do note that Tucker said out loud there that the terrorists are who Republicans represent. That's not Wonkette saying mean words about Republicans, that's Tucker saying that. Note how he said that "us" and "all the people who have been arrested during this purge" are essentially one and the same. It's a direct quote! Because from the beginning, Tucker has been pushing a narrative that an attack on the anti-American terrorists of January 6 is an attack on all the Fox News viewers who rest their exposed top teeth gently on their bottom lips as they watch Tucker.

Anyway, here's a great ad that collects Republicans like Lindsey Graham, Mitch McConnell, Kevin McCarthy, and yes, Ted Cruz, condemning Donald Trump in various ways after the terrorist attack he incited. It ran on Fox News. Bet that made Tucker mad too.