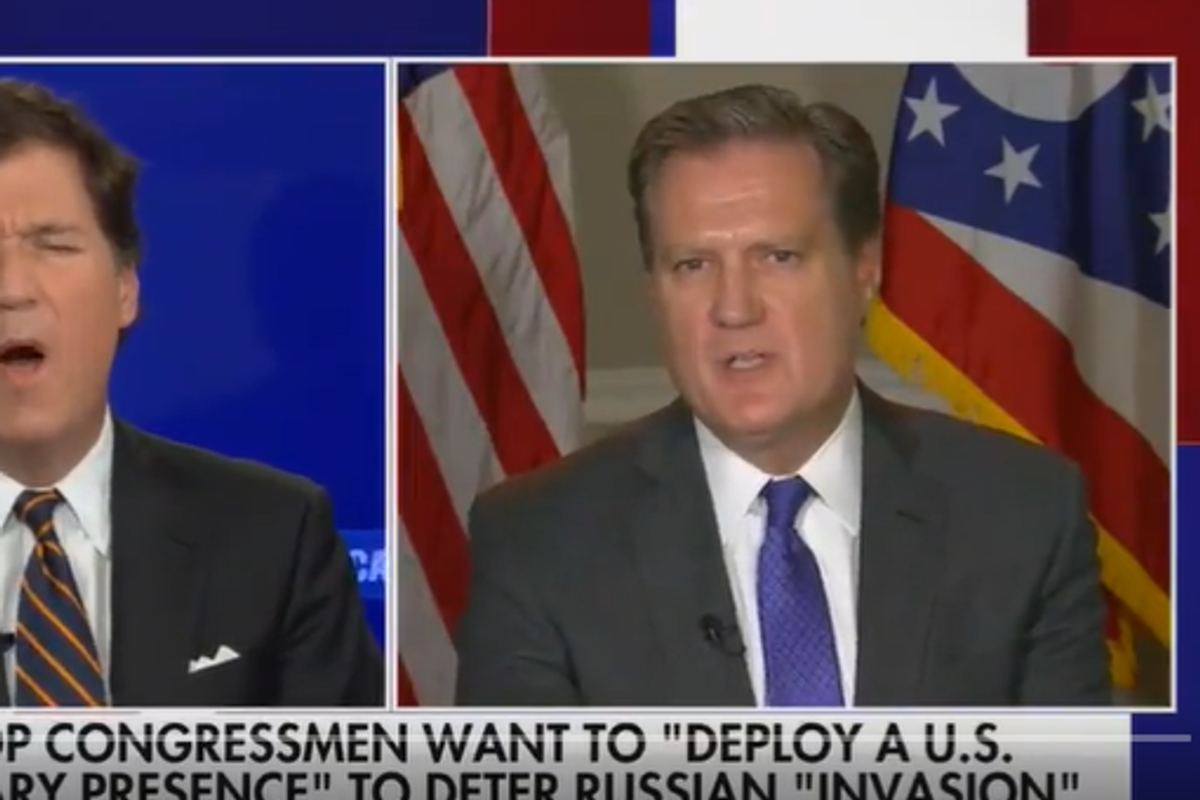 Wednesday night, Tucker Carlson, the Fox News host who went to Hungary this summer to make excitement jizzes about its authoritarian white Christian nationalist government, interviewed GOP Rep. Mike Turner of Ohio, and talk turned to Russia's everlasting war on Ukraine. Apparently there are concerns at the moment about shit the Russian military is currently pulling near the Ukrainian border. Rep. Turner and a number of other Republican reps sent a letter last week encouraging the Biden administration to actually deploy troops, and also send more weapons. The Biden administration is paying attention, but in case you were wondering, oh yeah, Republicans are about to start accusing Biden of being offensively soft on Russia, because of course they are.

Now, because Donald Trump was so aligned with Russia against American interests, NATO interests, and Ukrainian interests during his short, disastrous presidency, we've had occasion to discuss Russia's war on Ukraine a number of times the past few years. All Trump's foreign policy quid pro quos, from the 2016 campaign to the 2020 election, seemed to have something to do with siding with Russia against Ukraine and helping poor Russia get out from under the sanctions it's been enduring for so many years, ever since it invaded Ukraine and stole part of that country in 2014.

During the Trump years, Mike Turner was a fairly reliable Trump sycophant on the House Intelligence Committee, but we guess he was one of those Republicans who, when it came down to it, generally believed in established American foreign policy toward Russia's war on Ukraine. He just didn't like it when people made besmirch statements about Trump giving aid and comfort to Russia, we suppose. (Remember how one of the GOP's fake defenses of Trump in his first impeachment was that NUH UH, Trump has been the TOUGHEST to Russia and MOST HELPFULEST to Ukraine, unlike Nobummer McBlanketGiver?)

So it was that when Tucker and Turner talked about Russia and Ukraine, Turner was the voice of reason about who is our enemy and who we're supposed to be supporting, Tucker, you un-American bag of ballsacks.

"I'm totally confused" -- Tucker Carlson wonder why the US would be allies with Ukraine instead of Russia, since Russia has more energy reservers. Rep. Mike Turner reminds him that we're supposed to be on the side of democracies. Carlson responds by saying, "I guess"pic.twitter.com/XIXfJXKsML

So that was strange.

Turner spoke of making certain we are giving Ukraine the security and assistance it needs, and Tucker — GOLDEN RETRIEVER TILTED QUESTION FACE HIGH-PITCHED JUST ASKING QUESTIONS! — interrupted the congressman to ask "why" we would "take Ukraine's side and not Russia's side." You know, besides how Ukraine is our ally and Russia is a sworn enemy of the United States.

Hey remember how we just mentioned how Tucker spent a week this summer sitting on Hungarian dictator Viktor Orban's lap? Guess who Orban and all the other fascist dictators love? Time's up, it's Vladimir Putin.

"Why?" Tucker asked. "Sincere question," said Tucker. "No, but HWHWHWHY?" Tucker said it again, like the congressman had just told him he had to be home from the frozen dinner debutante ball by midnight. "Who's got the energy reserves? Who's the major player in world affairs? Who's the potential counterbalance to China, which is the real threat?" It's adorable how authoritarian Republicans try so hard to get us excited about how cool Russia is, as if Russia had an economy larger than Italy's, or wasn't a complete shithole thanks to Putin.

"Well, clearly!" said Mike Turner, who was like whaaaaaat? He told Tucker to get out a map and find the Black Sea and find out where America's missile defense system is, and then learn something about the history of the conflicts over that-a-ways, and who did what. And we didn't know how to feel, because we were sort of cheering on this Republican congressman who turns out has a functioning brain somewhere in there.

With a look on his face that sort of said "I can't believe I'm having to explain this," Turner continued:

TURNER: Ukraine is a democracy. Russia's an authoritarian regime that seeks to impose its will upon a validly elected democracy in Ukraine, and we're on the side of democracy.

It's not that complicated, Tucker.

TURNER: That's why people were chasing those planes in Afghanistan and wouldn't be chasing Russian ones. We're for democracy. We're for liberty. We're not for authoritarian regimes coming in and changing borders by tanks. Russia isn't showing up on the border with ballot boxes, they're showing up on the border with tanks, and that's why we need to make sure we're on the side of democracy [and then he said that GOP bullshit propaganda about how Obama only gave Ukraine blankets and no other help].

Impassioned speech! You tell 'em, Adam Schiff! Er, we mean GOP Rep. Mike Turner! You tell us about all those ballot boxes you love so many bunches!

(We're not going on an extended sidebar about how Mike Turner isn't protecting voting rights in America because that's not what this post is about, but we are typing this parenthetical to simply acknowledge it.)

And Tucker replied, "I guess I'm for democracy in other countries, I guess."

He guesses. But, like, not really. Probably because of that stiffy he has for all the fascists.

We don't know what needs to be done in response to the latest Russian aggression, and we'll sure be paying attention to it more in the coming days. But we feel like it's important to note that Fox News's leading white nationalist man has already decided he's gonna keep pushing his white nationalist viewers toward taking the enemy's side.

So noted, Tucker. So noted.