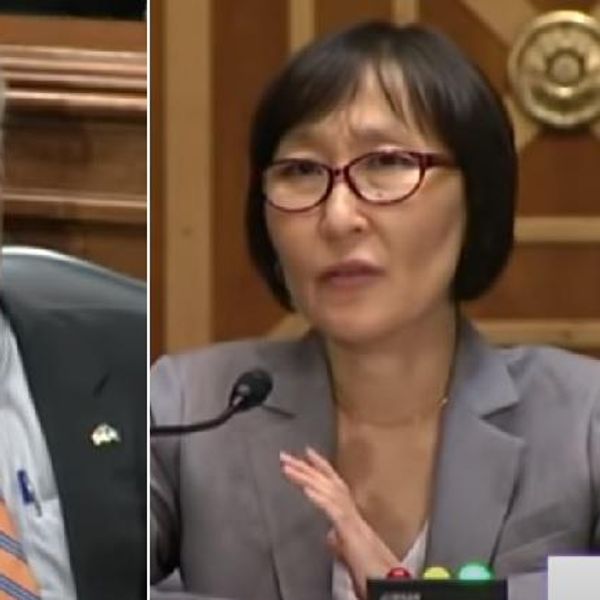 The Cold War ended with the collapse of the Soviet Union in 1991, but you might not know that from Thursday's hearing of the Senate Banking Committee. You see, Joe Biden nominated Saule Omarova, a professor at Cornell Law School, to serve as head of the Office of the Comptroller of the Currency, the federal agency that regulates assets in more than a thousand of the country's largest banks. Her nomination has really horrified Republicans because there's a good chance Omarova might actually enforce the rules limiting the risks big banks can take, and that might limit their profits, and is that even allowed in US America?

Omarova was born in Kazakhstan in 1966, and came to the US in 1991, just as the USSR was falling apart; in an interview on Chris Hayes's "Podcast For Nerds, We Bet You Are A Big Nerd," Omarova said she arrived in the US with "one suitcase and a fifty-dollar bill in my pocket." She did a whole bunch of American Dream stuff that we're supposed to love our good immigrants for, like getting a doctorate in political science from the University of Wisconsin-Madison, and then a JD from Northwestern. She served in the Treasury Department during the George W. Bush administration, and then went on to teach law at UNC-Chapel Hill and eventually Cornell.

For her sin of saying in public that maybe the banking system shouldn't play fast and loose with customers' federally insured assets, Republicans have launched an all out effort to suggest Omarova must still in fact be a red red communist commie what wants to turn America communist, because when you think "Bush administration banking policy," you automatically think "The Russians are coming! The Russians are coming!" (To launder money in a Trump property, maybe.)

And that's how Sen. John Neely Kennedy (R-Louisiana), the Oxford-educated dude who pretends he's just a corn-pone shitkicker, came to ask Omarova Thursday whether she is now or has ever been a communist, and whether she ever hid any microfilms of secret H-bomb plans in Alger Hiss's pumpkin patch.

Here's the revolting display of redbaiting; we'd note that while Senate rules proscribe senators from disparaging the character of any other member of the Senate, they don't say anything about being outright assholes to nominees during confirmation hearings, especially if the nominee was nominated by a moderate Democrat (who's secretly Trotsky).

Again, remember that Dr. Omarova is a law professor who specializes in financial regulation, and that when she worked at Treasury nearly two decades ago, she was an advisor on regulatory policy. But that wasn't the job experience Kennedy was interested in, so he asked, "You used to be a member of a group called the Young Communists, didn't you?"

Omarova explained, patiently, that when you grow up in the USSR, then yes, everybody was in the organization, and it was "a part of normal progress in school."

Then the questioning got surreal:

Kennedy: Have you resigned? From the Young Communists?

Omarova: You grow out of it, with age, automatically.

Kennedy: Did you, did you send them a letter, though, resigning?

Omarova started to explain that's not how any of it worked in the Soviet Union, but Kennedy asked her to look through her records to double check whether she had formally resigned from a group that she not only had aged out of, but in a country that she left behind when she was in her twenties. Also a country that no longer exists.

At that point, Banking Committee Chair Sherrod Brown broke in to object to the entire line of questioning (because Democrats are mad with power), pointing out that Dr. Omarova had "renounced her Soviet citizenship" long ago. Nonetheless, Kennedy persisted, because all he wants to know is whether she actually resigned from being a communist.

I would just like to state at this point that I have never officially resigned from the Boy Scouts (I stopped going after "Webelos"), the Catholic Church (they don't let you), or the Banana Splits Fan Club (still loyal).

Then Kennedy listed off several of the other supposedly terrifying facts of Omarova's communist past, as a high-achieving undergraduate in the USSR, like studying "scientific communism" and "class struggle" at Moscow State University. (Why didn't she go to the Leningrad branch of Bob Jones University, huh?)

Omarova even wrote an undergraduate thesis on Karl Marx! In October, Sen. Pat Toomey (R-Pennsylvania) demanded she send him a copy of it, in the original Russian, which Kennedy pointed out she has not done. How suspicious! And remember, she did all this like five minutes ago, so please ignore the fact she left the USSR and went on to 30 years of academic and public service work in the USA.

Oh, but even worse! In a 2019 Canadian documentary — they're commies too, you know — Omarova "called the financial services industry 'a quintessential asshole industry.'" Ah. Only a commie would ever think ill of finance bros.

After citing some recent academic work that he meant to sound very scary, Kennedy deployed his lovingly prepared spontaneous zinger: "I don't mean any disrespect" — he absolutely meant disrespect — "I don't know whether to call you professor, or comrade."

Before Dr. Omarova responds to Kennedy, there's a brief pause where she clearly expresses weariness from having dealt with this bigotry all her life and knowing, deep down, that no matter how hard she worked, she'd never not have to face it.

But then she had to answer, because what is America for immigrants and people of color but one endless loyalty oath?

Senator, I'm not a communist. I do not subscribe to that ideology. I could not choose where I was born. [...]

My family suffered under the communist regime. I grew up without knowing half of my family. My grandmother herself escaped death twice under the Stalin regime. This is what's seared in my mind. That's who I am. I remember that history. I came to this country. I'm proud to be an American, and this is why I'm here today, Senator. I'm here today because I'm ready for public service.

Well sure you are, but did you even love America enough to have sent a letter resigning from communism 30 years ago?

But because this is the Senate Banking Committee, Omarova did at least have fellow traveler Elizabeth Warren in her corner to point out what was really going on: Republicans don't want Omarova to be regulating banks because she might actually regulate them, not because she'll send all the brokers at JP Morgan Chase to collective farms (tempting though that may be). Here, enjoy a nice Warren chaser after Kennedy's awfulness.

Addressing the "vicious smear campaign" against Omarova, which she said were "pages straight out of Joe McCarthy's 1950s Red Scare tactics," Warren quickly confirmed that, despite Republicans' hyperbole, the OCC definitely does not have the power to nationalize private banks and create a People's Utopia.

Then she got to the real point of Republican opposition: Omarova wants to hold banks accountable when they break the law. What a terrifying prospect!

Yr Wonkette is funded entirely by reader donations. If you can, please give $5 or $10 a month so we can keep reminding you that time is not actually happening all at once, no matter how much it feel like that these days.