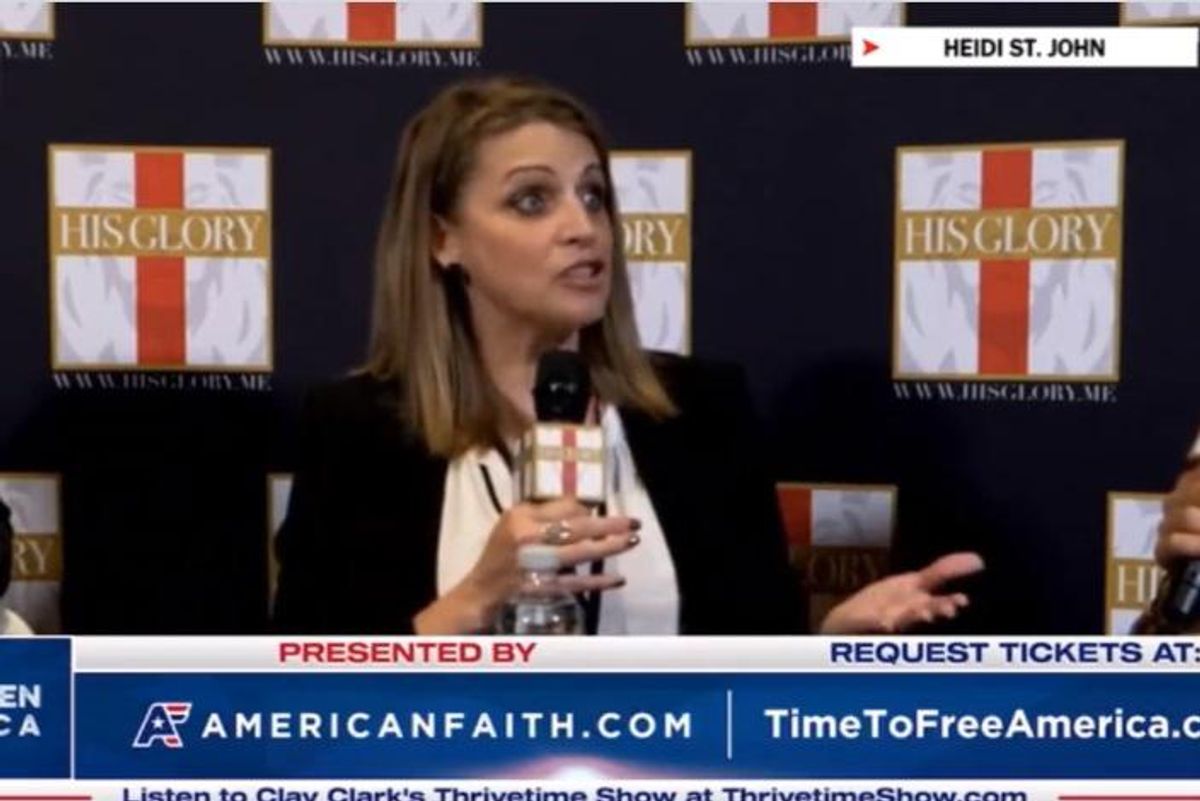 Meet Heidi St. John, a rightwing Christianist homeschooling blogger who's running for Congress and would very much like to unseat incumbent Jaime Herrera Beutler (R-Washington). Beutler faces several challengers from the Right this year because she voted to impeach Donald Trump for inciting the January 6 riots.

St. John may not have much of a chance against her fellow primary candidate Joe Kent, an Army special forces vet; Trump endorsed Kent even though St. John likes to point out Kent used to live in Portland, Oregon, and is therefore barely an American. But like so many hopeless wingnut candidates, she certainly has the potential to at least make for good Wonkette stories.

During an interview recorded backstage at the "ReAwaken America" event in Dallas in December — yes, the one where everyone caught COVID and insisted they were attacked with "anthrax" — St. John explained that public libraries are "evil organizations" that force little children to accept the transgender agenda:

The full 15-minute interview is a trip, but we aren't masochists, so we skimmed. After an introduction in which she explained that the virus of liberal indoctrination from schools is far deadlier than anything children might be forced to wear a mask for, St. John explained that "something inside me just snapped" when Herrera Beutler voted to impeach Trump, so she knew she had to run.

Here's the setup to the video: St. John told the tragic story of a woman she met at a conference years ago who explained that her own son became trans because of indoctrination by school books, and the poor deluded woman even believed that reinforcing that "delusion" was supporting her kid, when the right course of action would have been to make clear there are only men and women and nobody can change that, because God.

Parents continuing to love their trans kids without forcing them to not be trans anymore, she explained, is a "spiritual attack on our children." Then St. John veered off into a digression about how public libraries are also super evil promoters of evil because they stock horrible evil books saying trans people are not an abomination unto God.

You see, she said, trans people are "literally indoctrinating our children," and you can prove it yourself:

You can go down to any public library — the public libraries are disasters. They're actually evil organizations now, because they're run by the American Library Association, which is a wicked organization at its roots. And so I turned in my library card years ago, and for a homeschool mom to turn in her library card it has to be pretty serious, you know?

But I went down there and said, "No. Your bathrooms are not safe for my children anymore. The books that you're putting [...] up on the shelves for little children to read are dishonoring to the children, and dishonoring to parents. And they won't tell parents what's inside these books, so the kids are sitting down and they don't understand that they're slowly being lulled into a completely backwards way of thinking.

In this 2017 podcast, St. John explains she used to take her kids to the public library all the time, BUT because of the ALA, all local libraries are now "very very very involved in the transgender advocacy movement" and she bets you didn't even know that. St. John was especially mad about an ALA press release objecting to Donald Trump's rollback of Obama-era protections for trans kids, because ungodly and wrong, and also she was flabbergasted because, "I assumed that the American Library Association would be interested in protecting children."

Also in that podcast, St. John somehow seems to think the ALA's annual "banned books" list was a list of books the ALA had banned. Yes really.

By the way, in case you think that the American Library Association doesn't ban books, you would be wrong! The American Library Association has a list of its "top most challenged books of 2017." They basically do ban things! It's amazing to me. [...] They have "frequently challenged books," you can shop the banned books merchandise online, your library has an agenda and that's what it comes down to.

Lest you wonder if she's merely confused, St. John starts reading the titles of books on the 2017 list, claiming that the ALA "tried to ban them." But then halfway through the list, maybe she figured out that she had it backward, and that it's good decent people trying to ban the books, because she also complains libraries are actually promoting that filth.

Or maybe the ALA is trying to ban books so it'll drive sales? She's not the most coherent speaker.

In any case, St. John explains, public libraries should be places where kids can get books about "Peter Cottontail and Mike Mulligan and the Steam Shovel and the Chronicles of Narnia," but not all this nasty trans indoctrination telling boys that they can be girls, which she says is clearly the reason for youth suicides, because "anytime when we tell children that they can be something that their Creator says they can't be, suffering is the sure result."

Clearly, the only answer is to tell kids that God says they can't be LGBTQ, but to be loving about it, which will surely set them straight and make them happy. That's just logic, amen.

We'll confess, we didn't have the stamina to listen to St. John's later podcast from July 2021, "THE WAR ON CHILDREN: THE LEFTIST AGENDA OF THE AMERICAN LIBRARY ASSOCIATION," but here's the written intro:

What image comes to mind when you think of or hear the word librarian? Most of us think of a sweet older lady who has a penchant for organization and quiet. Unfortunately for our children, that illusion is long over. Today’s libraries are leftist indoctrination centers who will crush anyone that dares mess with their war on children.

And we can hardly wait for the Washington District 3 Republican primary debates, if any.

Yr Wonkette is funded entirely by reader donations. If you can, please give $5 or $10 a month so we can keep you up to date on the the ever-shifting battle lines of the Culture Wars.