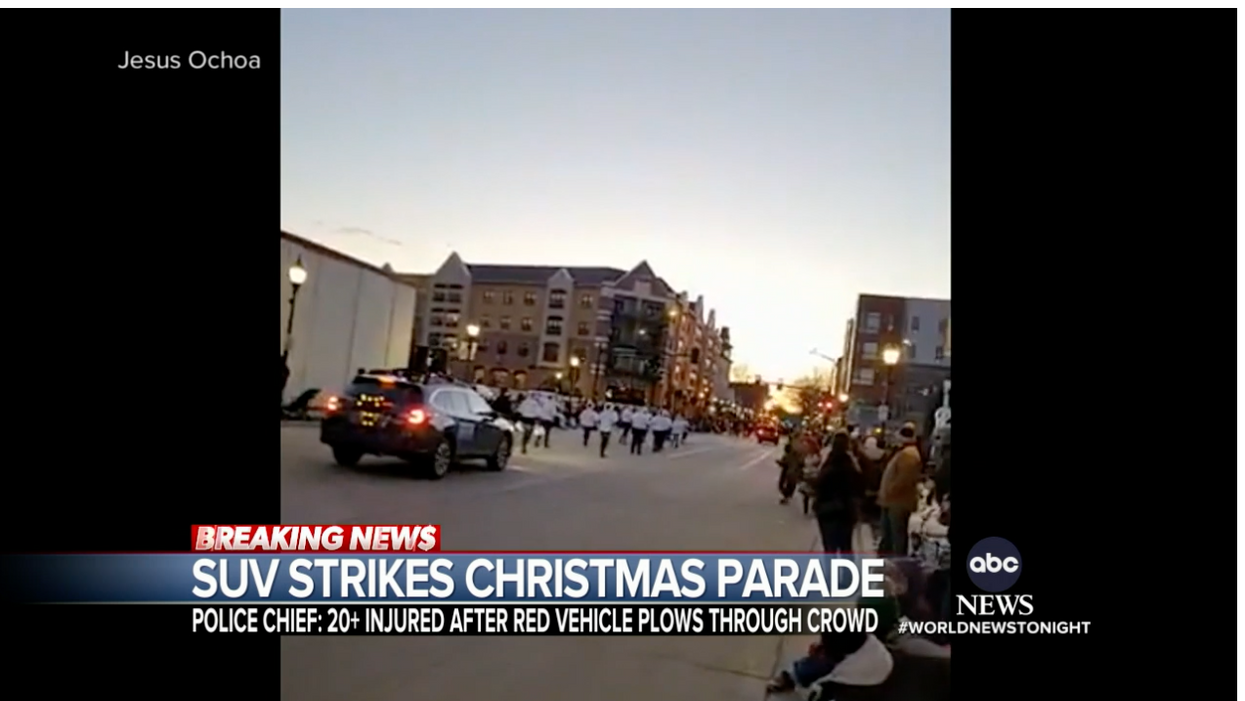 Waukesha, Wisconsin, police identified Darrell Brooks Jr. on Monday as the driver suspected of mowing down human beings at a holiday parade Sunday, killing five people (so far) and injuring at least 48 others. Brooks is expected to face five counts of first-degree intentional homicide, as well as additional charges. Those counts would likely increase if the death toll rises. If convicted, each count would result in a mandatory life prison sentence.

According to Waukesha Police Chief Dan Thompson, Brooks was involved in a "domestic disturbance" before he attacked the parade attendees. He'd been charged three times in less than two years with “recklessly endangering the safety of others," most recently in an incident in which he is accused of running over the mother of their child with his vehicle in Milwaukee.

It's uncertain if he still had a license, but personally, I think once you've intentionally used a car as a lethal weapon, your ass is now a permanent bus rider.

Brooks has been released on $1,000 bail, which the Milwaukee County District Attorney's Office admits was “inappropriately low."

The Waukesha suspect had ALREADY been charged with trying to run over a woman yet his bail was only $1,000? Time and again our society's failure to protect women leads to an escalation of violence and more victims. Praying for the grieving families.

The Waukesha suspect had ALREADY been charged with trying to run over a woman yet his bail was only $1,000? Time and again our society's failure to protect women leads to an escalation of violence and more victims. Praying for the grieving families. https://www.jsonline.com/story/news/crime/2021/11/22/suspect-waukesha-parade-incident-identified-darrell-brooks-jr/8717524002/\u00a0\u2026
— BlackWomenViews Media (@BlackWomenViews Media) 1637605522

The issue isn't the low bail, I think, but just that was he released at all. A wealthy person who was just as much a potential threat could've afforded $1 million bail, but that wouldn't necessarily make anyone safer.

Brooks was out of custody for an "ongoing domestic violence case," which meant he was an ongoing threat to a woman. Even low-life embezzlers are confined to their homes with those unsightly ankle bracelets.

Thompson said police are "confident" that the suspect acted alone, and he said there is "no evidence this is a terrorist incident."

Police have "no information that Brooks knew anybody in the parade," he said. Officials have not commented on a possible motive. The FBI said it was assisting local authorities in the investigation

It's encouraging that this isn't domestic terrorism or what Fox News might leap to describe as a racially motivated antifa attack. (Brooks is Black.) But it remains depressing that violence against women, especially women of color, isn't treated as significantly as it should. Would Brooks have gotten $1,000 bail if he'd burned a police car during a riot? Arizona prosecutors recommended $100,000 bail for a young man arrested and charged with “unlawful assembly" after a Black Lives Matter rally in Phoenix. Again, I don't think absurdly high cash bail is the answer in general, but given the current system, prosecutors reveal what crimes they feel are serious based on the bail they request.

The district attorney's office released a statement insisting that the $1,000 bail wasn't consistent with how it normally approached cases "involving violent crime, nor was it consistent with the risk assessment of the defendant prior to setting of bail." The office is conducting an internal review of the decision and then will determine next steps.

Brooks had been charged with crimes 16 times since 1999. He'd been accused of firing a gun at friends and neighbors. He also clearly has issues with motor vehicles. During a traffic stop, a Milwaukee cop jumped inside Brooks' car, "fearing he was about to be run over."

According to court records, this is what happened just a few weeks ago on November 2:

A 31-year-old woman who had a child with Brooks had told authorities that he showed up at her Milwaukee motel on Nov. 2, yelled at her and took her phone before driving off, according to a criminal complaint.

When the woman walked away, Brooks "ran [her] over with his vehicle" while she was in the parking lot, the complaint said. Officers later said the woman had dried blood on her face, a swollen lip and "tire tracks on her left pants leg," according to the complaint dated Nov. 5.

Fortunately, Brooks is back in custody, but innocent people have paid the price for some bad decisions.