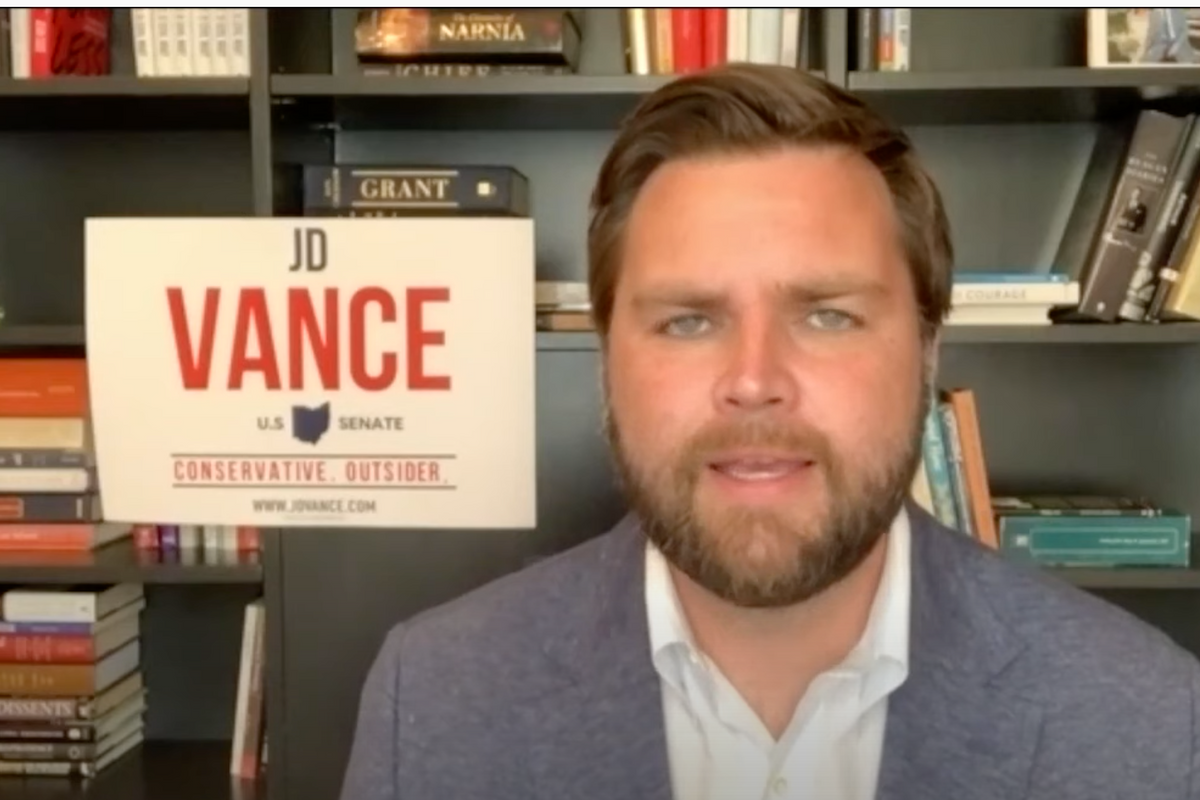 As if this were an actual open question, and not the punch line of the world's stupidest joke. This is a graduate of Yale Law School who runs a hedge fund for Peter Thiel who spent the past six months trying to out-stupid Josh Mandel, a guy who literally burned a surgical mask in a stairwell. But, gosh, who can say if he's only pretending to be a dumb hick who's going to dismantle Big Tech?

In 2016, Vance described himself as "a never Trump guy," tweeted "My god what an idiot" about him, and claimed to have voted for Evan McMullin. Now he's all in on the former president, even after the Capitol Riot, describing himself as "not just a flip-flopper, I’m a flip-flop-flipper," and acknowledging that support for Trump is simply the price to play in today's GOP.

"If I actually care about these people and the things I say I care about, I need to just suck it up and support him," Vance told Time last summer.

Is the guy whose Yale Law professor Tiger Mom-ed his memoir about growing up poor in Appalachia into a bestseller and major motion picture faking it for political advantage? It's a mystery!

Writer Simon van Zuylen-Wood uses Vance's beard as a leit-motif signifying the change in the lawyer as he transformed into a hard-Right political candidate.

And this might be a clever literary device if the author acknowledged the blinding reality that Vance is wearing this faux populist shit as a costume.

"The beard isn’t a bad symbol for Vance’s U.S. Senate campaign — or at least for how that campaign is being received," van Zuylen-Wood continues. "Discourse around the race centers mostly on the idea that Vance is a changed or fraudulent person."

We're talking about a man whose wife clerked for both Chief Justice John Roberts and Justice Brett Kavanaugh, and he's shitposting about childcare subsidies being "class warfare" because "normal" women want to stay home with their babies as God intended.

The author quotes Vance saying, "The fundamental lie of American feminism of the past 20 or 30 years is that it is liberating for women to go work for 90 hours a week in a cubicle at Goldman Sachs," without even questioning who is taking care of his young children as he runs this shambolic campaign and his wife works 90 hours a week at a white shoe law firm.

Vance is a guy who called New York a, city of eight million Americans, a "disgusting and violent" hellhole. He failed to mention that he was en route to the Hamptons to hobnob with titans of industry, former Bush officials, and Rebekah Mercer.

FFS, Vance is a wholly owned subsidiary of Peter Thiel, who employs him at a hedge fund and plowed $10 million into his US Senate campaign, and he's still pretending he's going to drop the hammer on Big Tech.

"Just totally absurd. These companies need to be crushed," he tweeted this week after Rep. Marjorie Taylor Greene's account got suspended for posting constant COVID misinformation.

And yet, van Zuylen-Wood is able to piece together a coherent intellectual throughline in what looks for all the world like craven fucking hypocrisy:

The surface-level changes are indeed striking. Yet the more I watched him, the more it seemed to me that the emerging canon of “what happened to J.D. Vance” commentary was missing the point. Vance’s new political identity isn’t so much a façade or a reversal as an expression of an alienated worldview that is, in fact, consistent with his life story. And now there’s an ideological home for that worldview: Vance has become one of the leading political avatars of an emergent populist-intellectual persuasion that tacks right on culture and left on economics.

In what universe is opposing the child tax credit while supporting a lower corporate tax rate "left on economics"?

Vance outright admits that he has made a conscious decision to put all his chips on shitposting, telling the author, "Dominant elite society is boring, it is completely unreflective, and it is increasingly wrong. I kind of had to make a choice.” And indeed, it is "a choice" to shit tweet about Alec Baldwin the week the actor accidentally shot a crew member on set. It's the choice to be an asshole because you think it will benefit you politically.

But you don't get to make that choice and then complain about a "hyper-atomized approach to living [which has] denied people a sense of solidarity." And if you're an honest writer, you don't let your subject paint himself as someone trying to bring Americans together while spending every hour jamming his finger into hot button social issues because that's what motivates the base.

Critical race theory! The elites! Big tech! Traditional values! Wokeness! AOC! Socialism! Real America! This guy's like a windup doll — you pull the string, he says all that shit over and over.

And not for nothing, but retconning the Bannon/Thiel/Mercer project into some kind of moral response to the godlessness of the Left is some amazing bullshit.

National conservatism is the intellectual version of Trumpism, committed to the populist reorienting of the GOP away from free markets and interventionist foreign policy. As Trump never fully pursued his own project, the movement has taken on a slightly anarchic quality; surveying the conference’s speakers, it could be difficult to tell what linked Orban-defender Dreher to, say, Orlando Magic power forward Jonathan Isaac. Still, what the key factions agree on, as Sam Adler-Bell wrote in a recent New Republic essay, is that “classical liberalism — of the sort embraced by previous generations of conservatives — has a big hole in the middle of it where a substantive concept of the Good should be.”

Haha, fuck you. Sorry those of us on Team Blue care about boring shit like the child tax credit, expanding Medicaid, and not turning Planet Earth into a burning ball of lava. We really need to reorient our "concept of the Good" to include ditching the estate tax and lowering the top personal income tax rate to 20 percent.

Or maybe the Washington Post needs to stop giving ink to people just asking questions to which the answer is and always has been clear.

JD Vance doesn't have a beard. Vance is the beard. He's a millionaire funded by billionaires, LARPing as Joe Sixpack in an effort to buy a Senate seat and to protect his bosses' bottom lines. It ain't that complicated.