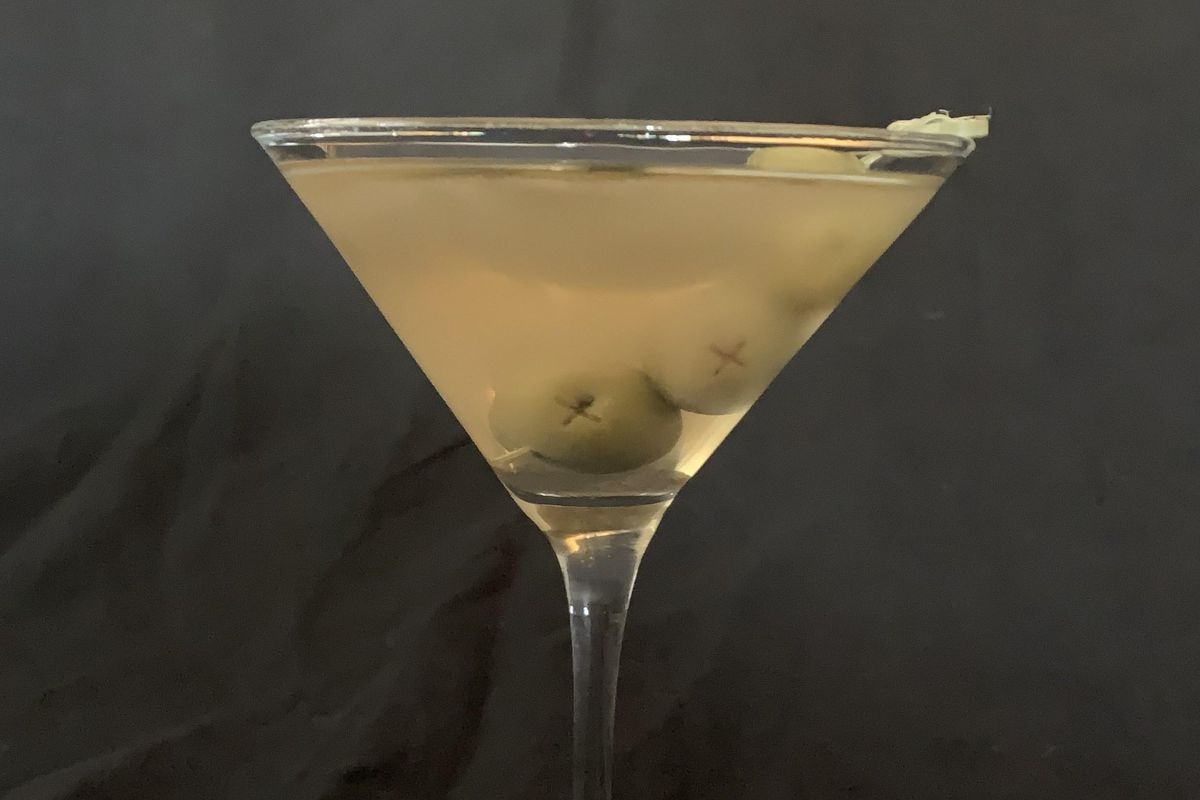 Greetings, Wonketteers! I'm Hooper, your bartender. I'm glad people liked my dry martini recipe last week. How about some dirty martinis? Fair warning, this one's going to be a bit controversial. Trust me. I'll explain why we're using these ingredients as we go. Here's the recipe.

Let's address the elephant in the room first: This is not a "real" martini. Martinis are made with gin; we're using vodka. We're also shaking instead of stirring. That's okay, though. Lots of drinks served in martini glasses aren't "real" martinis. I've made chocolate martinis, appletinis, and pear martinis before. None of those drinks are "real" martinis, either. They aren't pretending to be. They're delicious drinks that stay true to their own flavor profile, served in a martini glass.

This dirty martini is built with the same plan in mind. It's not a "real" martini with olive brine added in. Rather, it's a cocktail built to showcase olive brine. Everything in this glass is meant to enhance the olive juice and make it tastier. The end result is lighter than plain brine, with spiciness and earthiness enhancing the fruit. It's not "salty," but when you finish a sip, you can lick the saltiness from your lips. It's not a cocktail I'd drink on its own, but with raw oysters or a filet mignon, it would be heavenly.

Let's review the ingredients. I'll talk a little bit more about my design choices as we go. 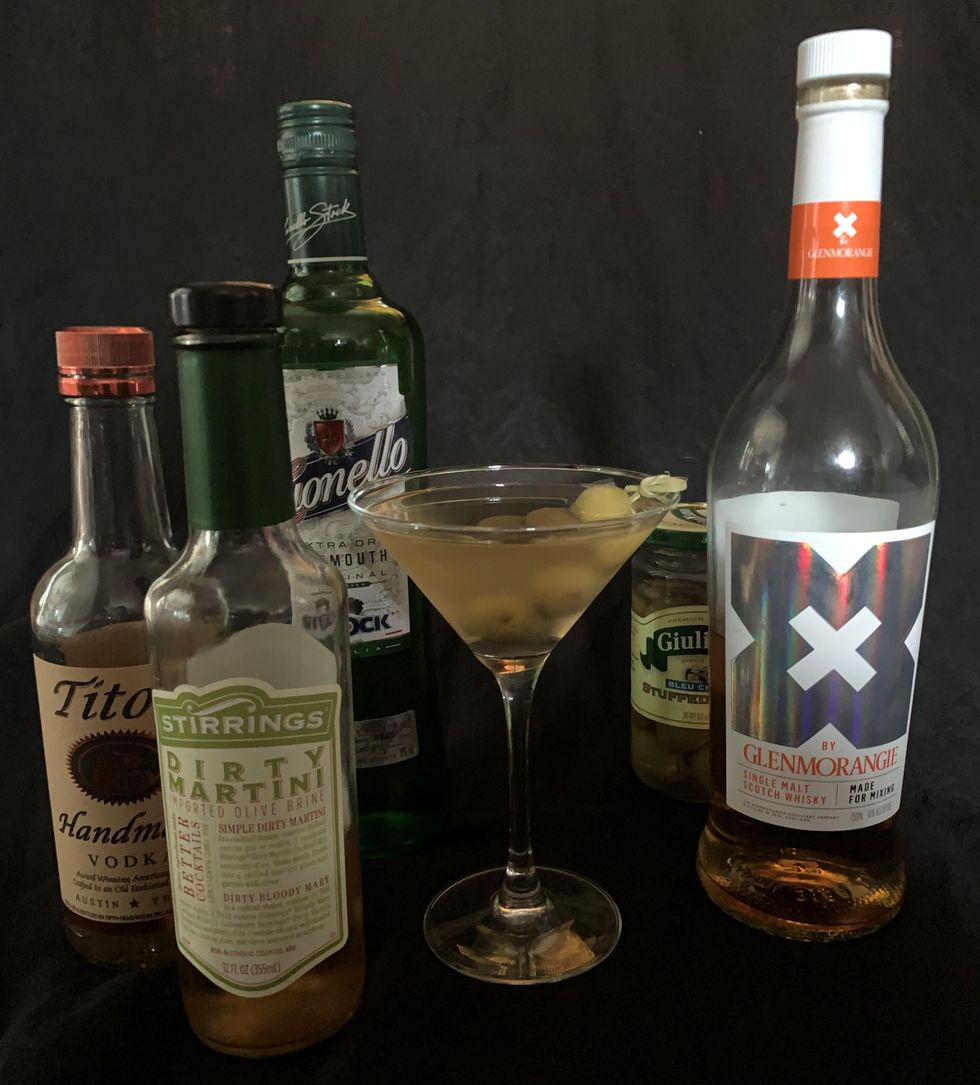 Ingredient shot. The dirty martini vanished in a mysterious fashion shortly after this photo was taken. Matthew Hooper

Tito's Vodka: I prefer Tito's in my cocktails, but other brands work fine. I like Tito's because it's American-made, it's gluten-free, and the company donates money to good causes. But any vodka in the same price point would be fine. The vodka gives the brine space to expand and breathe. Gin would compete with the olives in the glass. If you want to be a purist, I'd try a London Dry gin instead of vodka. Tanqueray in particular would be a good choice. The coriander flavor would coordinate with the olives nicely. If you're a serious rebel, I'd try aquavit — a Norwegian cousin of gin that uses caraway instead of juniper as its base. But at the end of the day, I'd rather use vodka and let the brine speak for itself.

Filtered olive brine: I always prefer filtered brine instead of tipping a jar of olives into my cocktail shaker. When I'm making martinis at the bar, I want every dirty martini to taste the same. Brine from an olive jar isn't always consistent. The stuff at the top of the jar isn't as salty as the bottom. And I definitely don't any wayward scraps of olive finding their way into the customer's glass. Behind the pine, I use the Filthy brand of olive brine. Stirrings is also a brand I trust, but it's not as dark and intense as Filthy.

Lionello dry vermouth: Dry vermouth provides some sharper flavors that keep the cocktail from bogging down in earthy notes. I'm still using Leonello as a solid all-around dry vermouth. If you're willing to splurge, I'd spring for a bottle of Trincheri dry. The flavors on Trincheri are just a little less sweet than other vermouths, and line up with the brine slightly better.

X by Glenmorangie Scotch: Using Scotch in a martini isn't as radical as you might think. It's a bit obscure now, but "burnt" martinis are a thing. Behind the bar, this means I tip a few drops of Islay scotch in the martini glass, swirl it around, and shake it out. It gives the entire martini a smoky edge without being identifiable as Scotch.

For home use, I'm not going to suggest buying a $60 bottle of Islay so you can use it one drop at a time. Instead, I'm going to recommend using this very interesting new product from Glenmorangie. "X" is a single-malt Scotch explicitly crafted for use in cocktails. It's oh so slightly smoky, bitter in an appealing sort of way, and has a fresh-meadow scent that provides a needed earthiness in this dirty martini. It's not as intense as Islay Scotch, so I went with a full quarter ounce instead of a swirl-and-dump.

Technique: Traditionally, any cocktail with fruit juice must be shaken. Aerating the juice keeps it from being too heavy and concentrated. I've chosen to treat the olive brine as "fruit juice" and give it the same treatment. Double-strain to catch any wayward ice shards.


Garnish: Three olives, mandatory. You want to smell the olives as you drink. Bleu cheese stuffed are ideal, but feta-stuffed are great. And remember, even numbers of olives are bad luck.

The prospect of a non-alcoholic dirty martini doesn't sound appealing on its face. It could be a nice change of pace, though. Most NA cocktails are juice or soda based, and getting away from the sweetness on a hot day would be pleasant. I'd drink a shot of this NA cocktail with some raw oysters in a heartbeat. There is some dry vermouth in here, but the ABV should be below one percent.

Shake and strain into a small martini or shot glass. Garnish with a blue cheese stuffed olive. Drink all at once, with the olive as a chaser.

In summary and conclusion, drink well, drink often, and tip your bartender — donate to Wonkette at the link below! Tiki Underground is winding down in anticipation of moving. I'm currently behind the pine at Dodie's Dockside in Lorain, OH. Mmm, lobster rolls. And if you'd like to buy some ingredients or bar gear from Amazon, please click on the links above, or this one!