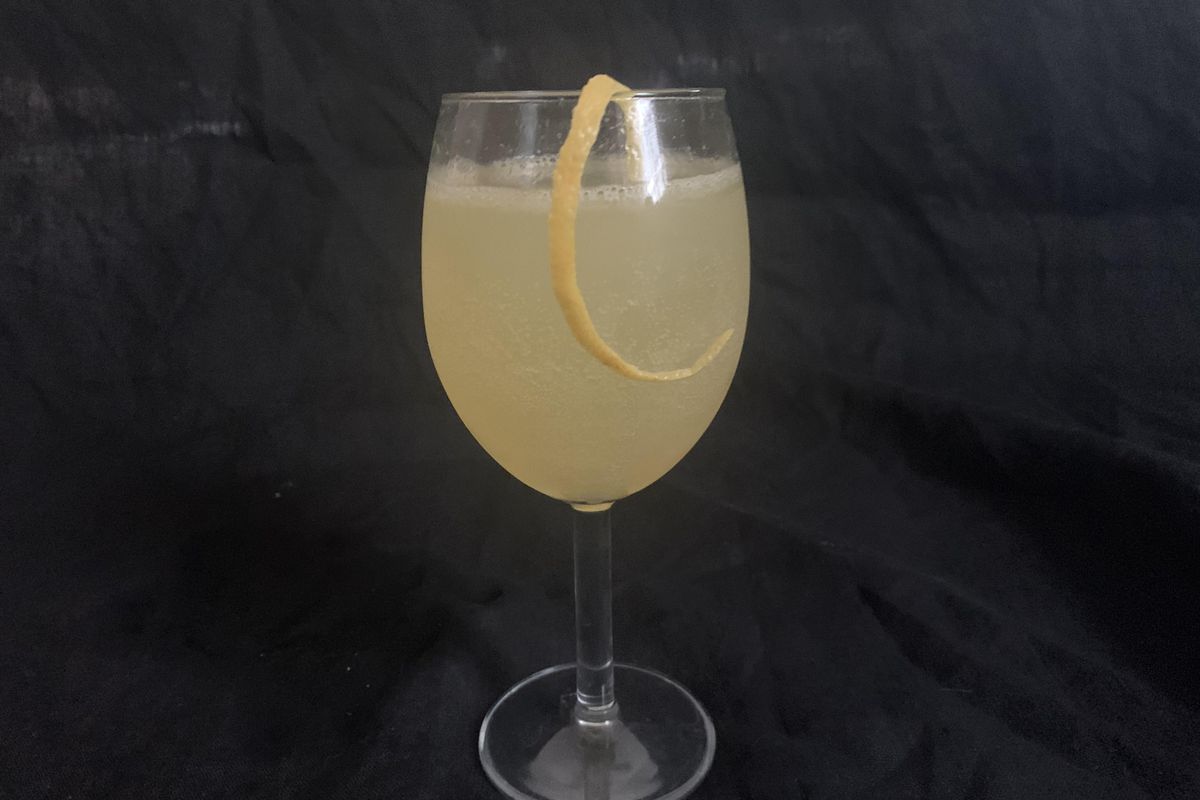 Greetings, Wonketteers! I’m Hooper, your bartender. Got leftover champagne from New Years? Or maybe you’d just like an excuse to drink more champagne? Here’s a mashup of two of my favorite champagne cocktails. Let’s make some Mimiosa 75’s. Here’s the recipe.

Shake all ingredients except sparkling wine over ice 8-12 seconds. Strain into a white wine glass and top with sparkling wine. Garnish with a lemon twist.

Champagne has been a part of the cocktail scene from the very beginning. One of the earliest recorded cocktails is simply champagne, sugar, and bitters — basically, a champagne old fashioned. The French 75 and the Mimosa were invented during Prohibition. The Mimosa was born at the Paris Ritz Hotel in 1925, the French 75 in America around 1930. France had absolutely no qualms about working with American bootleggers to get its wine into American hands. (Conversely, the French were much less interested in getting good champagne into the hands of the Nazis; wine made under the Vichy government was, deliberately, the worst France has ever produced.)

The trickiest bit of dealing with champagne is opening the bottle. Most of the cheap-but-tasty sparkling wine we use behind the bar has a screw top of some sort. Keep a bar towel over the bottle cap while you’re opening it. That will keep the cap from flying away. I had one very, very scary moment back at the club with a stubborn champagne cap. I didn’t have a towel over the cap while I was sawing at it with my pocket knife. The cap flew across the room, ricocheted off the ceiling, and nearly took out a 90-year-old grandmother. Don’t shoot your grandmother. Keep a towel on the cap. 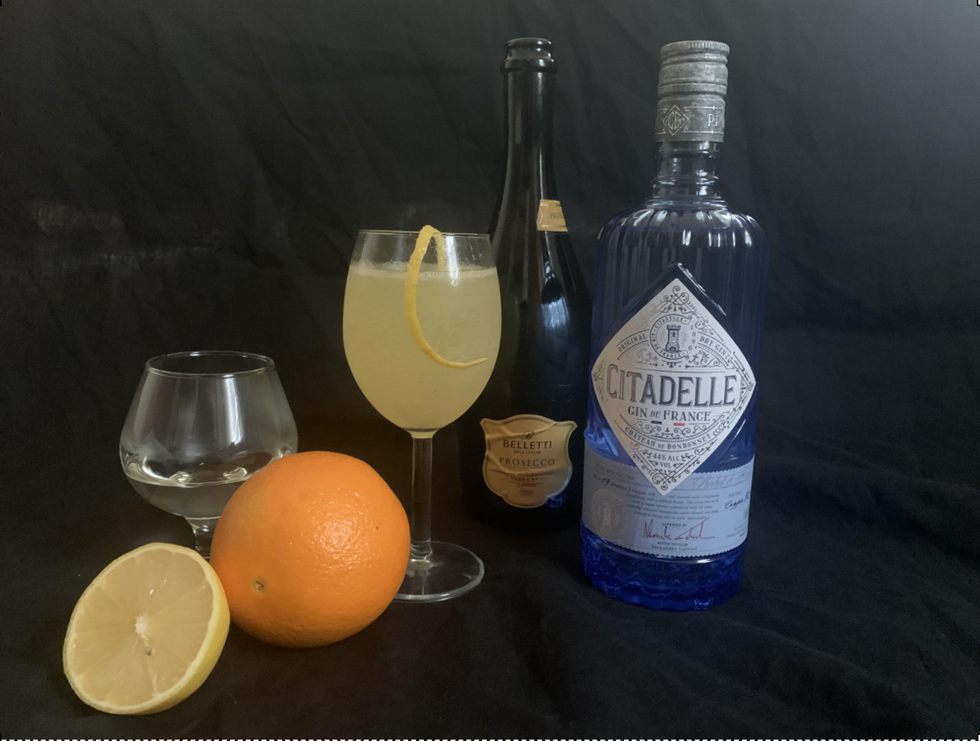 Orange Juice: When I say “fresh,” I mean “fresh” – as in, squeeze the orange then and there as you’re making the drink. Bottled OJ is too acidic for this cocktail, and calling it “over-processed” doesn’t even begin to cover it. Strain the OJ with a fine mesh strainer before adding it to the cocktail strainer. The orange pulp will do you no favors.

There’s no reason you couldn’t use peach puree instead of OJ and make a Bellini 75. I’ve made pomegranate and raspberry mimosas in my time, and they’re great. Keep a fairly light hand on the juice here. A 50/50 mimosa is great for brunch, but the juice should flavor the cocktail, not dominate it.

Citadelle Gin: Using a French gin for champagne cocktails seems like a natural move, and Citadelle is pretty great in its own right. Citadelle is light on the juniper and heavy on the baking spices. The cinnamon and cardamon notes cooperate exceptionally well with the fruit. If you’re using peach or raspberry instead of OJ, try exploring some other gins. There are some really interesting new brands out there. Bombay has a berry gin that would be fantastic with some good strawberry puree.

Simple Syrup: Use plain white sugar instead of the demerara sugar I normally use – 1:1 ratio of sugar to water, warm until dissolved, make a bunch. It keeps in the fridge for months. Alternately, just mix the sugar and water in a sealed jar, give it a good shake, and forget about it until tomorrow. Some cocktail authors insist that cold-method syrup is better than warmed syrup. I’m not convinced it makes a difference, but making simple syrup without turning the stove on is a lot easier.

Lemon Juice: Fresh is a must. Do yourself a favor and cut the lemon twist from the lemon before you juice it. I’ve got a lot of denuded fruit from cocktails in my fridge, and trust me, after a while bad things happen.

Sparkling Wine: Yeah, yeah, I know, “It’s not champagne unless it comes from the Champagne region of France.” The French government is really great about insisting on that distinction. Honestly, I don’t care too much. I’ve never used “real” champagne in a cocktail, and it would certainly be a waste if I did. There’s plenty of good, tasty sparkling wine out there to drink. Drink it, and don’t worry about where it was made.

I’m using a fairly large glass for this cocktail. Champagne flutes are often tiny, and the ratio of wine to booze is going to be strong if you’re making this in a small flute. A 1:1 ratio of sparkling wine to gin cocktail is about right here. Adjust as you see fit.

There’s a lot of sparkling grape juice out there that tastes fine. I’ve poured a glass or two of Welch’s during weddings for dry guests without complaint. A “mimosa” of OJ and grape juice is going to be a bit on the sweet side, but still tasty. I’d squeeze in a little lemon juice to balance it out. This is also a good place to use a non-alcoholic gin like Seedlip. NA spirits are getting better and better with time. You wouldn’t mistake Seedlip for “real” gin sipped neat. But in an NA cocktail it will bring complexity to an otherwise simple drink.

In summary and conclusion, drink well, drink often, and tip your bartender — donate to Wonkette at the link below! And if you'd like to buy some bar gear or books from Amazon, please click on the links above, or this one!