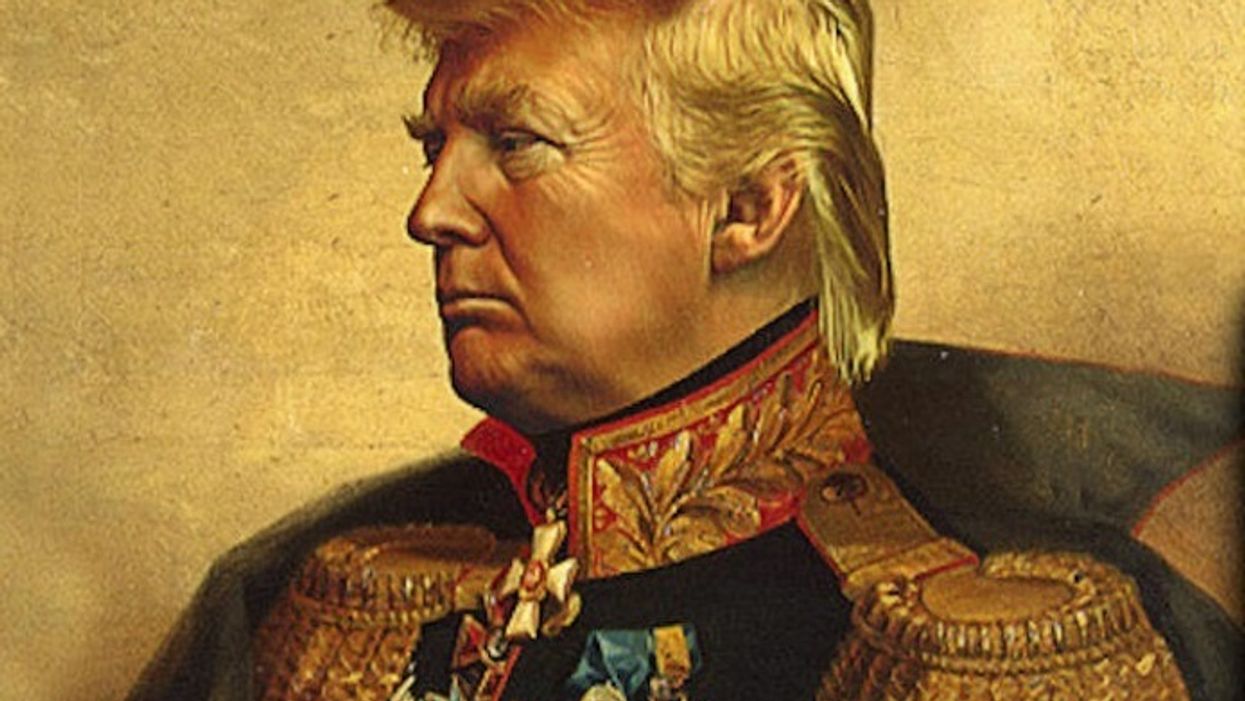 For months there have been reports that attributed the delay in putting down the Capitol Riot to the Defense Department's fear that Trump would use any troops on the ground to mount a coup. But today Just Security has a meticulously detailed compilation of evidence supporting the thesis that Trump's own appointees were deathly afraid that he'd wield the military against Congress in a desperate attempt to hold on to power, and it's hair raising.

With respect to planning for Jan. 6, the publicly available evidence to date very strongly suggests that the senior defense officials’ concerns led them to impose unprecedented constraints on the authorizations and substantive conditions for use of the Guard – [acting Defense Secretary Christopher] Miller admitted as much. Those constraints help explain the substantial delay in sending a first group of Guardsmen to the Capitol. What’s more, the evidence also indicates that the same concerns potentially explain why the Pentagon did not approve deployment of the National Guard in sufficient time – and, indeed, authorized the deployment only after President Trump eventually made a public announcement (at 4:17 pm) that he was not in favor of continued occupation of the Capitol.

Noting that multiple Trump allies such as Roger Stone, Michael Flynn, and Mike Lindell were bruiting the idea of invoking martial law in the days after the election, Goodman and Hendrix observe that Trump took multiple steps to rearrange the command structure at the Defense Department in ways that allowed him not only to investigate spurious allegations of Italian space lasers hacking the election, but might have permitted him to use the military toward his own nefarious ends. In fact, he explicitly fired Defense Secretary Mark Esper for, among other things, saying he would not invoke the Insurrection Act to deploy the military against protesters.

"Yesterday was appalling,” CIA Director Gina Haspel told General Mark Milley, chairman of the Joint Chiefs of Staff, after Esper was fired. “We are on the way to a rightwing coup."

Similarly, (acting) Defense Secretary Christopher Miller cited reports that Trump was contemplating martial law as the reason he was loath to allow National Guard troops anywhere near the Capitol.

“There was absolutely no way … I was putting U.S. military forces at the Capitol, period," he told the Defense Department Inspector General, emphasizing that he “made a very deliberate decision that I would not put U.S. military people … east of the 9th Street, northwest. ... And the reason for that was I knew if the morning of the 6th or prior if we put U.S. military personnel on the Capitol, I would have created the greatest Constitutional crisis probably since the Civil War.”

Although, as Just Security points out, Defense officials — including Michael Flynn's brother — cited "optics" at the time to account for their reticence to deploy Guardsmen to keep order in DC.

Meanwhile, having spent two months feeding them lies about a stolen election, Trump summoned thousands of goons to DC with the promise that it would be "wild." As the House January 6 Select Committee confirmed this week in the Mark Meadows contempt referral, the White House was deeply concerned about using the military to protect those anti-democratic loons from imagined hordes of antifa protesters.

At the [January 3] meeting, Trump queried his Defense secretary about preparations for Jan. 6 (see Senate bipartisan report). According to Leonnig and Rucker, Trump wanted to know whether there were plans to have adequate forces on hand that day, and in a pull-aside Milley asked Miller to assure him of the meaning of the exchange: “He approached Miller privately. Milley wanted to be clear that when Trump said ‘you’re all set,’ he was referring only to National Guard capabilities. ‘There’s nothing else set, right?’ Milley asked. Miller told him, yes, the National Guard was all the president meant. Nothing else was in the works.”

In testimony before the House Oversight Committee in an answer to a direct question from Rep. Byron Donalds (R-FL), Miller said that the President told him to “do whatever was necessary to protect the demonstrators that were executing their constitutionally protected rights.”

And when the shit hit the fan on January 6, Miller pointedly did not reach out to Trump, instead connecting with Vice President Pence and other White House staff. Was this because he feared getting a direct order to send troops into the Capitol to stop the Electoral College certification?

Whatever the case, it was only after Trump released that video at 4:17 p.m. telling the insurrectionists, "We had an election that was stolen from us. It was a landslide election and everyone knows it, especially the other side. But you have to go home now. We have to have peace," that Miller authorized the DC National Guard to deploy. At 4:40, two hours after Maryland Governor Larry Hogan had begun begging to send in the Maryland National Guard, Miller finally assented.

We may never know what really happened here. But in the absence of a bipartisan, depoliticized investigation, Trump and his allies have free rein to blame Democrats.

“I asked the Secretary of Defense, I said, I think you should recommend to Nancy Pelosi and to Congress, because they are the ones that control it, I would like to recommend 10,000 National Guardsmen," Trump told Bill O'Reilly on his Prostates Across America Tour. Which is nonsense, of course. Pelosi controlled neither the National Guard nor the external security for the Capitol. But since his audience is composed of credulous dipshits who believe the election was stolen despite any evidence at all, they ate that shit right up.

Anyway, you should read the whole thing. It's NUTS.