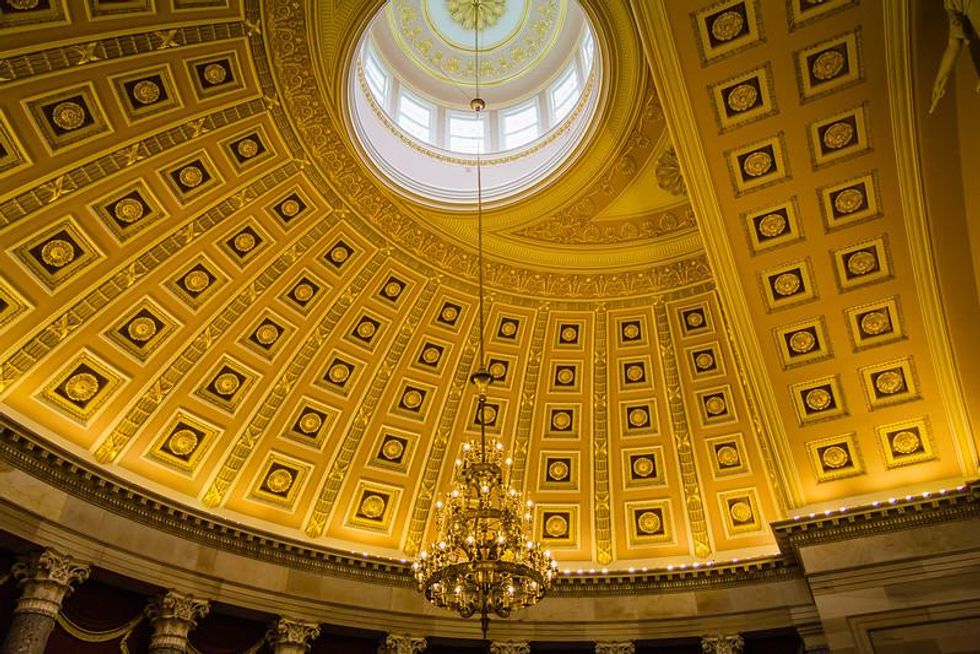 After managing to avoid a government shutdown last week, it now looks like Congress has also figured out a way to raise the stupid debt ceiling for a year and avoid a default on the national debt. The plan involves doing some stupid legislative hocus-pocus that will allow Senate Democrats to pass a debt limit increase with a simple majority, avoiding a filibuster from Republicans. The deal means Democrats can be the responsible adults making sure the economy doesn't collapse, while Republicans can all brag that they didn't vote for the USA to pay its bills, making them somehow the party of "fiscal responsibility."

As you may recall, the debt limit caps the amount of money the government can borrow to pay for spending Congress has already authorized. It's stupid bullshit that nobody cares about but that absolutely has to be passed to avoid a complete economic meltdown. It has nothing to do with authorizing future spending: It's all about paying the bills for legislation passed long ago, like the 2017 Trump tax cuts, the Iraq and Afghanistan wars, and probably paper clips for the Bureau of Land Management going back to 1985 (just guessing on that one).

If the debt limit isn't waived or increased, the government would default on its existing debts, interest rates throughout the economy would go way up because the "full faith and credit" of US money is suddenly shaky, and the US economy would almost certainly go into recession, followed by the rest of the world. And of course, the debt would still exist even if we did default. Such a default has never happened, but because it involves allowing the federal debt to increase, Republicans like to play chicken with the economy when there's a Democratic president so they can pretend they're preventing Democrats from spending wildly. During the Trump years, Republicans routinely raised or suspended the debt limit without complaint, and Democrats supported the bills because they're not fiscal terrorists.

Back in October, shortly before the likely drop-dead date for default, Congress passed a temporary increase in the debt ceiling. But it was only enough to last a little while, and here we are again; the Treasury Department says the US will run out of funding on December 15.

Senate Minority Leader Mitch McConnell said in October that he would never ever ask his caucus again to vote for a temporary debt limit increase, because he wants Democrats to be solely responsible for voting for more debt. McConnell and other Senate Rs had wanted to force Democrats to pass a debt limit increase via the budget reconciliation process, but Majority Leader Chuck Schumer has opposed doing it that way, because while Senate rules would allow it, it's a cumbersome, time-consuming process that Republicans could slow down through fun parliamentary tricks.

So here's the two-step fig leaf Schumer and McConnell announced Tuesday: Congress will pass a law to authorize a one-time fast-track process for increasing the debt limit with a simple majority in the Senate. Once that first bill is passed in both houses — and it will need 10 Republican votes in the Senate — then Schumer would introduce the bill to actually raise the debt limit, and it would be passed by all 50 Senate Democrats, plus a tie-breaking vote from Vice President Kamala Harris. Debate would be limited to just 10 hours, and no amendments will be allowed. Also, the amount of the debt limit increase would have to be specified, instead of just suspending the debt ceiling until a certain date.

To make the vote on the fast track process a bit more palatable for Senate Republicans, the bill also includes another bit of necessary housekeeping that will prevent mandatory spending cuts to Medicare and other government programs. (Why yes, that is another "fiscal responsibility" thing Congress introduced some time ago and now has to waive periodically because no one wants to cut Medicare, are you crazy?)

The House actually passed the fast track bill last night on a 222-212 vote; only one Republican, Rep. Adam Kinzinger of Illinois, voted for passage. Now the fast-track bill goes to the Senate, where McConnell says he's sure there will be at least 10 Republicans who'll vote for it, because after all, it'll put all the responsibility for the actual vote to raise the debt limit on Democrats. He explained that he was "confident this particular procedure coupled with the avoidance of Medicare cuts will achieve enough Republican support to clear the 60-vote threshold." Further, McConnell explained he hadn't backed off his pledge to not allow another temporary debt limit increase, because no Republicans will have their names on the actual vote for that.

"The red line is intact. The red line is that you have a simple majority, party-line vote on the debt ceiling. That's exactly where we will end up," he said.

McConnell then smiled slowly and munched triumphantly on some nice crunchy lettuce, looking forward to a far noisier fight over the Build Back Better reconciliation bill.

Several key Republican senators said yesterday that they would support the workaround, since on paper it meant no Republicans had to vote for paying any debts they had voted for under Trump, and could pretend that it was only about future spending by Democrats. GOP Whip John Thune (R-South Dakota) said it was a good plan, since it meant Dems would have to "own this massive increase in the debt that's going to accommodate all the new spending they want to do." Plus, you know, continued payments on the roughly $29 trillion in debt the US already owes, even if Congress never spent another penny forever.

Sen. John Cornyn was equally exuberant about pretending that until this week the US never had a bit of debt that needs to be covered:

Sen. Ted Cruz (R-Texas) thought the compromise was a bad idea because it didn't flirt enough with economic catastrophe, but at least he got to get the One Talking Point in there:

They've cooked up this new gimmick to try to force it through, but at the end of the day Democrats have the legal authority to raise the debt limit using reconciliation [...] They can do it with only Democratic votes but they are continue to try to engage in political games to try to maneuver Republicans into voting for the debt they've been racking up.

Cruz, pleased with how he'd made clear he never ever plays political games, then went back to finger-painting with his own shit and admiring his work.

Democrats, for their part, were mostly relieved that it looks like the threat of economic disaster will probably be off the table until after next year's midterm elections. Sen. Elizabeth Warren (D-Massachusetts) said Dems will just do what has to be done and get on with it.

“Democrats are willing to be the grown-ups in the room and get it done.” [...] Republicans, she added, were “the ones who are putting the United States at risk for defaulting on our legal obligations, and we just can’t have that.”

Also, Politico reports that House Republicans are absolutely furious with McConnell, because Donald Trump wanted the US to default on its debt so Americans would blame Democrats for the resulting world economic meltdown. It's just not fair.

And now we'll see if there actually are 10 Republican senators willing to do a completely routine part of their job. We'll let you know how that goes.

Yr Wonkette is funded entirely by reader donations. If you can, please help us pay our bills with a monthly donation of $5 or $10! Think of a way to metaphorically make House Republicans cry.