Skip to content
I'm back. Thank you, Yas, for going deep while I was away.

You haven't heard a word from the media about it.


Most of the talk focuses on Boebert's botched rendering of the phrase "Therein lies." I don't care about that -- Boebert isn't well educated, and many people mock her for that, but you don't have to have a GED to make mistakes like this. Ask a college professor:

For all intensive purposes, they tend to get these things wrong right from the gecko*


I'd rather talk about the number, because it's real but misleading. The International Centre for Missing & Exploited Children finds it in this FBI report of statistics on missing and unidentified persons from the National Crime Information Center.

But what does this mean? Kaitlyn Tiffany has written a very good piece for The Atlantic about the right's current obsession with missing children. She notes that many right-wingers cite a figure of 800,000 missing American kids per year:

There is a widely circulated number ... : 800,000 children go missing in the U.S. every year.... But the number ... comes from a study conducted in 1999 by the Justice Department, and it’s an estimate of the number of children who were reported missing over the period of a year for any reason and for any length of time. The majority were runaways, children caught up in custody disputes, or children who were temporarily not where their guardians expected them to be. The estimate for “nonfamily abductions” reported to authorities was 12,100, which includes stereotypical kidnappings, but came with the caveat that it was extrapolated from “an extremely small sample of cases” and, as a result, “its precision and confidence interval are unreliable.” Later in the report, the authors noted that “only a fraction of 1 percent of the children who were reported missing had not been recovered” by the time they were counted for the study. The authors also clarified that a survey sent to law-enforcement agencies found that “an estimated 115 of the nonfamily abducted children were victims of stereotypical kidnapping.” The Justice Department repeated the study in 2013 and found that reports of missing children had “significantly decreased.”

...The Denver Post won a Pulitzer Prize for its 1985 story laboriously debunking the statistics that had caused such widespread alarm. The actual number of children kidnapped by strangers, according to FBI documentation, turned out to be 67 in 1983, up from 49 in 1982.

In the 2020 FBI/NCIS document, the total number of missing child reports (see page 5) is, in fact, 365,348. But as page 4 of the document makes clear, nearly as many reports were purged as were entered in 2020, presumably, in most cases, because the children had been found, or had never been missing. Page 2 of the document says that there are quite a few open missing persons cases involving juveniles, but the number is much lower than 365,348 -- it's 30,396. (Many of these cases presumably date back to earlier years.)

Boebert doesn't tell us what she believes is going on. Others are not so shy. 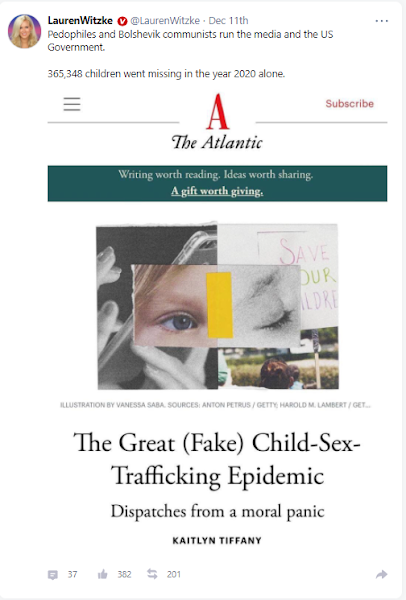 This is one of three identical posts I found at Gettr, from three different users, presumably bots.

Much of Tiffany's article focuses on the very conspiratorial organization Operation Underground Railroad.

... during a brief lull [a] volunteer, Ericka Gonzalez, drew me over to a corner of the tent to show me a video on her phone, which she thought might be called “Death to Pedos” but wasn’t. It was called “Open Your Eyes,” and Gonzalez pulled it up in the Telegram messaging app. “From the time we were little kids we revered the rich and famous,” the voice-over began, as images of celebrities and of battered children flashed on the screen. As I started to take notes, she pulled the phone away and wondered aloud if she had done something she shouldn’t have.

I watched the rest of the video a few minutes later, on my own phone. “We are digital soldiers, fighting the greatest war the world has never seen,” the voice-over explained. The bad guys: Barack Obama, Ellen DeGeneres, Lady Gaga, Chuck Schumer, Tom Hanks, Oprah Winfrey, Hillary Clinton. The good guys, a much smaller team: Donald Trump, Ivanka Trump, Barron Trump, Jesus, and an unidentified soldier holding a baby swaddled in an American flag. And, by implication, me, the viewer. “Our weapon is truth,” the voice-over continued as music swelled in the background. “We’ll never give up, even if we have to shake everyone awake one by one.”

That's what right-wingers mean when they talk about missing children: It's QAnon Lite, the belief that all their enemies are pedophiles and all their heroes are anti-pedophile warriors. Much of the discussion and activity of these beliefs now takes place with no overt reference to QAnon.

All of this fits neatly into the long-established narrative of the right-wing media, according to which every Democrat is responsible for any bad thing done (or believed to have been done) by a Democrat, liberal, socialist, anarchist, non-white person, celebrity, college professor, or, at the point, I suppose, primary or secondary school teacher. We are deemed to have created a stifling, toxic, exploitative, fascistic, Marxist left-wing culture, and we're all to blame. (Our side has never managed to create a similar narrative about the right, even though we actually are stuck in their world with regard to guns, climate change, economic inequality, taxation of wealth, health care, labor rights, and, in many states and soon everywhere, reproductive rights.) Persuadec right-wingers that child exploitation is far more widespread than it actually is and telling them that it's all the fault of rich liberals and famous Democrats is a hell of a way to keep people voting Republican when the Republican Party does nothing for them, but it apparently works, and will probably continue to work until the GOP ends democracy in America.