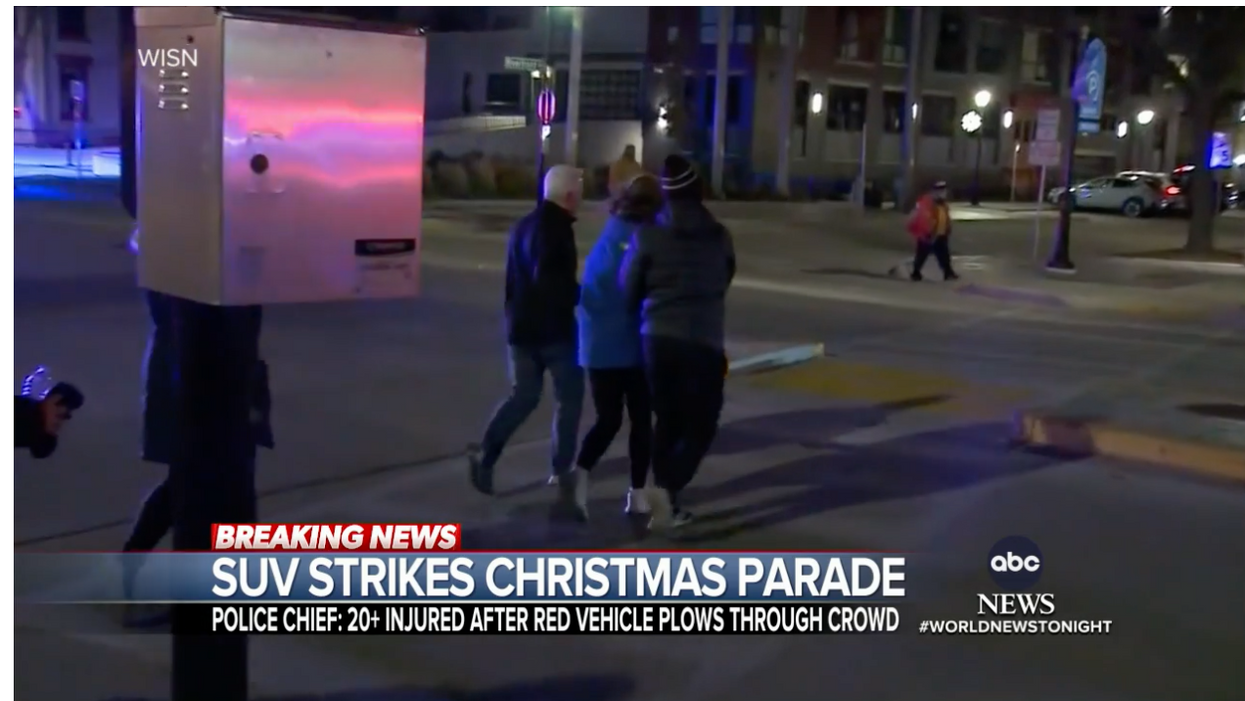 Sunday, residents of the Milwaukee suburb of Waukesha were enjoying the annual Christmas parade on Main Street. Last year's parade was canceled because of the pandemic, but this year, people felt safe to gather again. There were dance groups and high school bands. But then at 4:40 p.m., a red SUV drove past barricades and plowed through human beings. Authorities confirm at least five people were killed and more than 40 people were injured. This includes children, and the image of shattered strollers is haunting.

"Today our community faced horror and tragedy in what should have been a community celebration," said Mayor Shawn Reilly, who described seeing smiling children and happy parents when he marched along the parade route before the incident. "I'm deeply saddened to know that so many in our community went to a parade but ended up dealing with injury and heartache."

Children's Wisconsin is a hospital that exclusively treats pediatric patients and a spokesperson said 15 people were admitted on Sunday. Aurora Medical Center-Summit in Waukesha County said it was treating 13 patients and listed three in critical condition, four in serious condition, and six in fair condition. Froedtert Hospital in Milwaukee, a Level I trauma center that cares for the most critically ill patients, also confirmed it was treating victims of the parade attack.

The city's own footage shows the SUV speeding into the parade behind a school marching band. According to a reporter at the scene, the crowd could hear the sickening thuds as the SUV struck people.

Corey Montiho, a Waukesha school district board member, said his daughter's dance team was hit by the SUV.

"They were pom-poms and shoes and spilled hot chocolate everywhere. I had to go from one crumpled body to the other to find my daughter," he said. "My wife and two daughters were almost hit. Please pray for everybody. Please pray."

"My family is safe but many are not. I held one little girl's head in my hand, she was seizing and she was bleeding out of her ears. I held her mother as she collapsed. Please pray."

The police fired at the SUV as it fled the scene. The vehicle was later recovered and the suspect is in custody. There are reportedly indications the suspect was fleeing another incident. Waukesha Police Chief Dan Thompson said the investigation is ongoing, but there's currently no evidence of terrorism. Despite what you might've read on Twitter, there's yet no reason to believe the attack is connected to the Kyle Rittenhouse verdict just because it occurred in Wisconsin.

There's speculation swirling on social media about the suspect, but we're not doing that. Once more trusted sources confirm what's out there, we'll follow up in another post. Right now, we'd like to leave some space for the parade victims and the attendees who'll have to live with the trauma of what they witnessed.

\u201cThose who died were extremely passionate Grannies\u201d\n\nHeartbreaking update from the Milwaukee Dancing Grannies... it appears from their update they were among those killed at #waukeshaChristmasParade \n\n@cbschicago #WaukeshaWisconsinpic.twitter.com/rKq3gJq9eS
— Marissa Parra (@Marissa Parra) 1637588017

Among the dead are members of the Milwaukee Dancing Grannies, a troupe for older women, and that is truly one of the most depressing sentences we've written.

Our group was doing what they loved, performing in front of crowds in a parade putting smiles on faces of all ages, filling them with joy and happiness. While performing the grannies enjoyed hearing the crowds cheers and applause which certainly brought smiles to their faces and warmed their hearts.

Those who died were extremely passionate Grannies. Their eyes gleamed ..... joy of being a Grannie. They were the glue....held us together.

The Waukesha School District announced that all public schools are canceled Monday, as the community copes with this vicious act of violence.