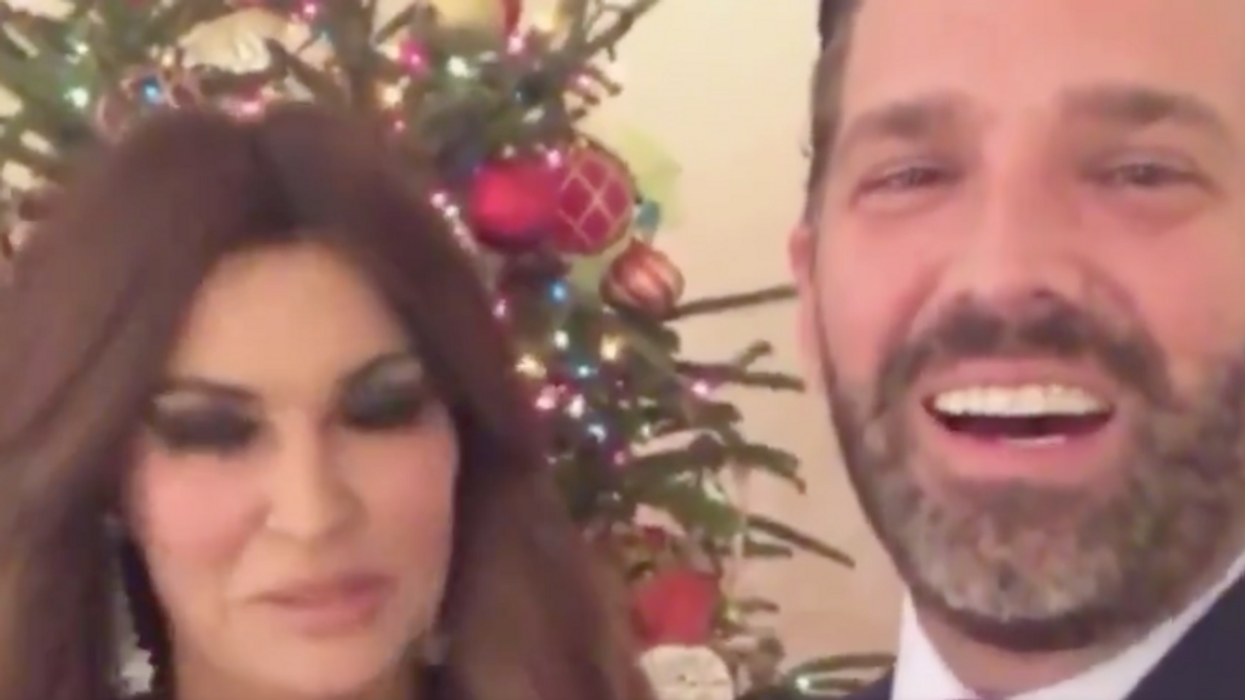 Point is, Page Six decided to remind us of those pet names as it announced that those two nasty motherfuckers are getting married.

Apparently the rumors started to fly when Guilfoyle posted this yuck picture a few days ago of the two yuckos stinking up the space in front of a Christmas tree, and she was wearing an engagement ring and saying some shit about spending the rest of their lives together.

So don't you want to hear how it happened? Or would you rather throw up for the rest of your natural life and then die of some kind of intestinal worm? Haha, tricked you, we're copy/pasting how it happened right now!

Trump Jr., 44, secretly popped the question to 52-year-old Guilfoyle on New Year’s Eve 2020, according to the Daily Mail.

“Don and Kim got engaged on New Year’s Eve 2020 — which is Don’s birthday. They’ve been together for almost four years now and have been friends for 15 years,” an insider told the website.

Haha, remember that big celebration they had at Mar-a-Lago on New Year's Eve 2017/2018, when it was Don Jr.'s birthday but you could barely find evidence that the occasion was even acknowledged, least of all by Don Jr.'s father? Good times.

Anyway, so they've been secretly engaged for a year and now it's not a secret and hey, good story, the end.

Hey remember that thing about how Donald Trump the Father thinks Kimberly Guilfoyle is "annoying"? It's one of the only things he's correct about, it's only fair that we mention it.

In related news, Don Jr. and Ivanka got subpoenas from the civil investigation of the Trump Organization being led by New York Attorney General Letitia James. They are of course already trying to argue "NUH UH!" because these people don't think laws apply to them. Please remember that some folks from James's office are also assisting in the Manhattan DA's criminal investigation into the Trump Organization, because that's fun information. Indeed, that's their argument for why they think they shouldn't have to comply, because James's office is also helping with the criminal investigation, which makes these subpoenas unfair because BLAH BLAH BLAH YADDA YADDA if you want to read their very smart Trumpy legal arguments, there are articles for that on the internet, but this isn't one of them.

In summary and in conclusion, Donald Trump Jr. has a subpoena from the New York AG, and also a fiancee who calls him "Junior Mint," but we don't know if she's talking about his penis when she says that.