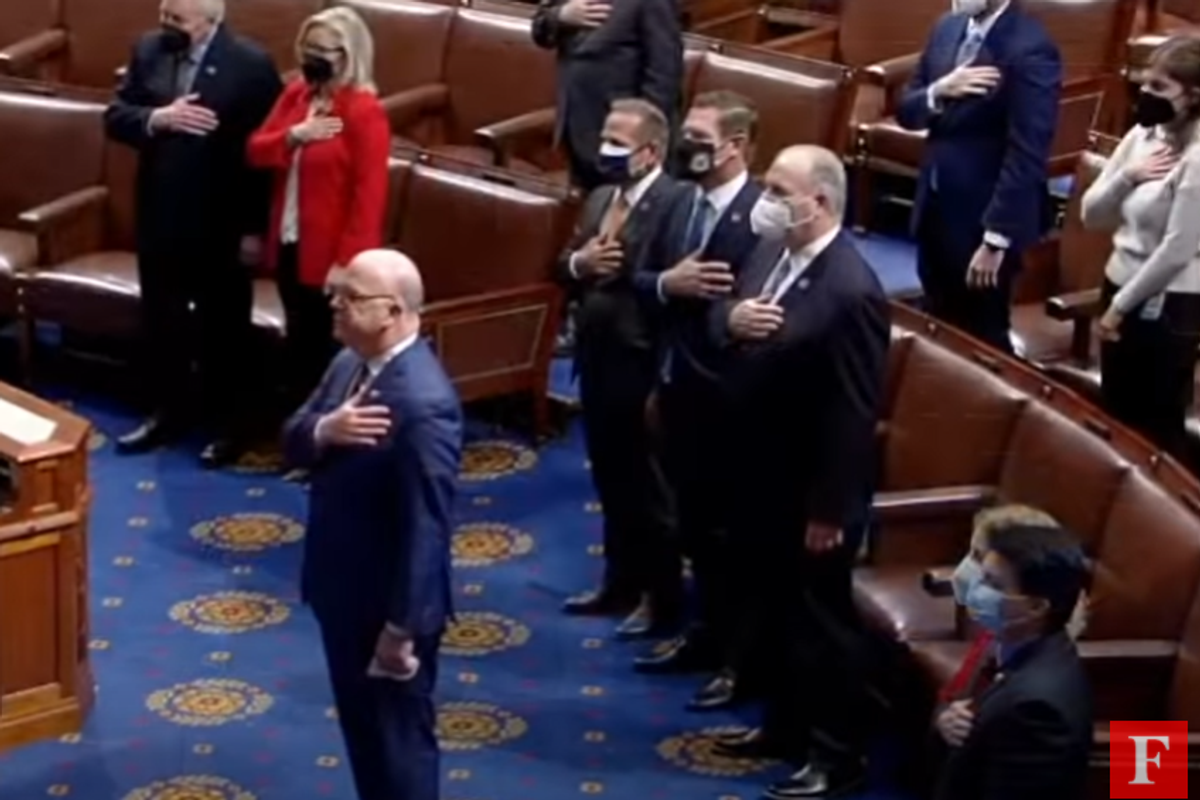 The first anniversary of Donald Trump's first terrorist attack is coming to a close, and at the bottom of this post, we'll have a video of the prayer vigil Congress is holding in remembrance. We started the morning hearing from the president and the vice president, who went at the former loser harder than we've ever heard them, while still not saying his name. And all day, members of Congress from both chambers went to the dais and spoke of what they experienced that day, and to say "never again."

We say "both chambers," but unfortunately we really can't say "both parties." Obviously Liz Cheney and Adam Kinzinger, who serve on the House January 6 Select Committee, are patriots, even as they're wrong about every single other thing in the world. But you can count the remaining elected Republicans who are patriots on one hand. Most of the rest of them are members in good standing of Donald Trump's fascist white supremacist insurrectionist party, and shouldn't really be spoken of in the course of discussions about normal politics. Especially the 147 members who one year ago tried to overturn the free and fair election of Joe Biden even after Trump's pig people attacked.

We wish that weren't the case, that there were still two American political parties. But you know, the old expression: If wishes were horses, Matt Gaetz and Marjorie Taylor Greene would make the horses wear thongs that say "Let's Go Brandon!" on them and release them in the Capitol Rotunda. (Is that the old expression? We are the worst at expressions!)

FURTHER: LIVE: Biden And Harris Return To Scene Of Trump Attack On America

MORE: LIVE: Congress Remembers What Happened January 6, Because They Were Literally There, TUCKER

AND THEN SOME: Here Are All 147 Members Of The Terrorist-Inciting GOP Sedition Caucus, May Their Names Forever Be Stained

Hey, speaking of those two patron saints of garbage fires, Gaetz and Greene took some time out of Insurrectionist Christmas to claim they are not celebrating today, but rather to tell their deranged bucktoothed lies about how January 6 wasn't an "insurrection," but might have been a "FEDsurrection." You know, because these morons are pushing a conspiracy theory, one being pushed by Tucker Carlson, that they were set up BY THE FEDS.

Because obviously to make people like Gaetz, Greene, Trump, and their supporters look like seditionist trash, there's gotta be a SET-UP.

.@RepMattGaetz: "Congresswoman Greene and I are not here to celebrate January 6th. We are not here to obsess about it, but we are here to expose the truth...January 6th last year wasn't an insurrection...but it may very well have been a 'fedsurrection.'"pic.twitter.com/BZkQTmGdFi
— CSPAN (@CSPAN) 1641497631

Further evidence of the GOP's current state as an anti-American insurgency rather than a valid political party is that today, on the House floor for Speaker Nancy Pelosi's moment of silence commemorating the somber occasion, the only Republicans present were Rep. Liz Cheney and her father, Dick Cheney. Yep, that's how low the Republican Party has gone, that we consistently have to point to CHENEYS as an example of "the best Republicans have to offer."

WOULD YOU LIKE TO LEARN MORE: Vice President Dick Cheney Still Undead

And Dick Cheney had some WORDS about all this, and now we have to copy/paste them and say "what he said" ABOUT DICK CHENEY, THAT'S HOW MUCH FUCK THESE REPUBLICAN TRASHASS MOTHERFUCKERS:

“It's not a leadership that resembles any of the folks I knew when I was here for 10 years,” Dick Cheney told reporters after exiting the House floor following a moment of silence in recognition of Jan. 6. [...]

“I’m deeply disappointed we don’t have better leadership in the Republican party to restore the Constitution,” he told ABC News earlier Thursday.

The elder Cheney came to the Capitol alongside his daughter, saying she’s “doing a hell of a job. I’m here to support her,” as well as to mark the day.

He ain't worried about his daughter Liz Cheney, though. It was remarked in the Wonkette Secret Chatcave that this quote has some serious Girl Dad Energy in it, regardless of ideological beliefs:

Asked how he felt about how she was being treated by the broader GOP, Cheney said, “My daughter can take care of herself.”