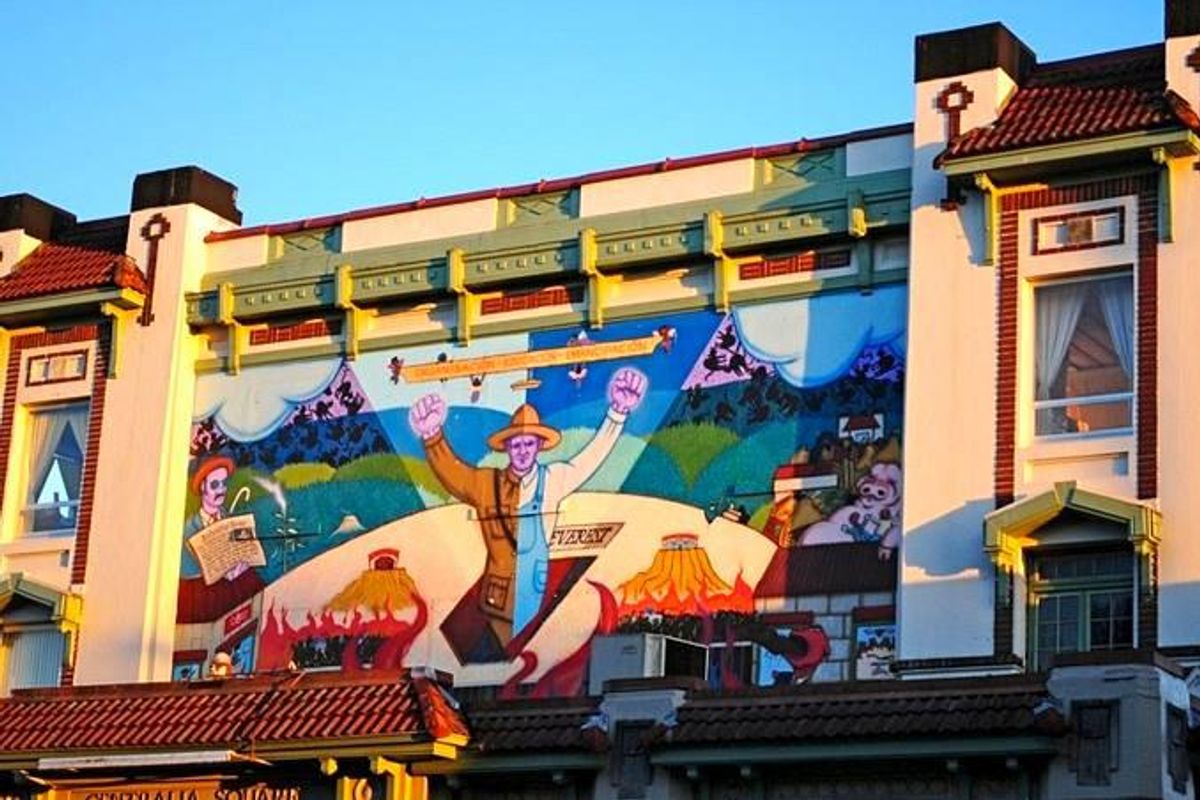 On November 11, 1919, the people of Centralia, Washington, a small lumber town in the southwestern part of the state, celebrated the first anniversary of Armistice Day with a parade. However, town leaders and the local American Legion post decided to turn the parade into an attack upon Centralia's Industrial Workers of the World union hall, which they considered the center of subversion and sedition in their community. When the Legion reached the hall, they broke in and began tearing the place apart. What they did not expect was that the radical loggers had prepared an ambush. The IWW had stationed at least two shooters on a hill approximately a quarter of a mile away. In addition, some of the workers in the hall had weapons. In the hail of bullets, four American Legion members died. Warren Grimm, a University of Washington graduate and lawyer, had not only fought in World War I, but had also served in the military's anti-Bolshevik force in Siberia before returning to his home town of Centralia. Arthur McElfresh had spent 18 months in the army in France. The third dead Legionnaire was Ben Casagranda, a Greek-American who went to war for his new nation. The fourth was another University of Washington graduate and member of the Centralia elite, Dale Hubbard.


Infuriated, the Legionnaires chased a man they thought was Britt Smith, the local IWW secretary, but who in fact was Wesley Everest, an itinerant logger and IWW member. They beat him severely and threw him into a prison cell with other Wobblies they had rounded up. That evening, still incensed, local men took Everest from his jail cell and hanged him from a bridge on the Chehalis River. Later IWW propaganda would claim they castrated Everest, but this is almost certainly mythmaking and not true, as no early documents, including from the IWW, mention it. Trials quickly ensued for a dozen other IWW members. A jury found eight guilty of second-degree murder, and they received sentences ranging from 25 to 40 years at the Washington State Prison in Walla Walla. The IWW claimed that the timber industry, the American Legion, and local authorities had railroaded the eight men into prison; and their cause served as a rallying cry for an increasingly marginalized IWW over the next 20 years.

Violence in this little lumber town took place as forces of order battled against radicalized loggers over control of the timber industry. Throughout the first two decades of the 20th century, timber companies treated their workers like animals. Working and living conditions in the timber camps were truly horrific. Loggers dealt with adulterated food, fleas and other vermin in their overcrowded housing, straw for bedding, the smell of disgusting wet socks drying near the bunkhouse's one heater, latrines located directly next to the dining hall so that they could smell feces when they sat down to eat, etc. They were paid next to nothing for their work and frequently ripped off by a cabal of timber operators and employment agencies who would force men to pay for jobs that disappeared when they arrived. These men also lived in all-male spaces, completely isolated from women in their remote camps. Thus, when men could get to town, the first thing many headed for was to purchase the services of a prostitute. They could not live with dignity either in the camps or when they returned to society. In desperation, and with the American Federation of Labor showing almost no interest in organizing these workers, they turned to the IWW.

Maybe I'm not being explicit enough. Let me clarify. In 1916, Red Cross doctor W.H. Lipscomb took a tour of Northwestern timber camps. He was outraged by all I mentioned in the previous paragraph. He mentioned one camp. It had bunkhouses that held approximately 80 men. Those 80 men had one sink in the bunkhouse. The company provided one towel for those 80 men. A new man came into camp. He was infected with gonorrhea. He used the towel to wipe places he shouldn't. The bunkhouse witnessed an epidemic of gonorrhea among the men. In their eyes.

So you can see why workers would join a radical organization like the IWW. But the Wobblies were hated by the timber industry and local authorities. A year before, in 1918, Centralia residents had destroyed the local IWW hall. They figured they could do so again. Little did they know that the union would set up shooters on the hills surrounding the town and arm some of the men inside.

The IWW was on the decline even before Centralia. The logging strike of 1917 had forced the government's hand to intervene in the timber industry because it needed spruce and fir to build airplanes for World War I. The government sent in the military. Rather than operate strictly as strikebreakers, the military chose to mediate the situation. It forced timber operators to improve the camp conditions and give the military rights to inspect them. No improvements = no soldiers to log and no government contracts. In return, it created a paramilitary loggers' organization and forced loggers to join it and renounce the IWW in order to work. Most did, particularly since the government was providing them the safe working and living environments the loggers were fighting for. Some refused of course, including the men still fighting to organize loggers in Centralia.

The Centralia Massacre was not the final blow for the IWW in the United States, but it was close. The official repression of the Red Scare combined with organized violence against the union to make it all but irrelevant. It did retain a small presence in the Northwestern woods through the 1920s and even into the late '30s, though the successful unionization of loggers in the CIO and AFL after 1935 made the organization pointless. Still, loggers in 1919 and 1939 showed a great deal of respect for all the IWW had done for them.

Mentioning the Centralia Massacre quickly became totally unacceptable in the community. Literally none of the participants on the Legion side ever told their story. They all took it to the grave with them. At some point, I think sometime in the '80s, Centralia residents commissioned a bunch of murals for their town representing their history. There are lots of scenes of white people settling the land, but nothing on the massacre. The labor hall in town put up its own mural, though it is kind of hard to see from the road because it is on the second floor. You have to know where to look.

The labor violence that was at the heart of the early 20th century, especially against radicals, is critically important to us today because of the increased war on workers. The fury of the capitalist class against workers for standing up for themselves, combined with the growing violence of the far Right in American politics, has created a world in which violence against organizing workers could easily become part of the landscape again. Just the other day, former Secretary of Labor Elaine Chao — also the wife of Moscow Mitch McConnell — went on TV to tell workers it was their "patriotic duty" to take low-paying jobs. Ha! I don't think so Elaine! But you combine that with the corporate support for Trump's coup attempt and you have the potential for a renewal of the old violent days of labor.

Tom Copeland, The Centralia Tragedy of 1919: Elmer Smith and the Wobblies

Please keep Wonkette in workers, if you are able!