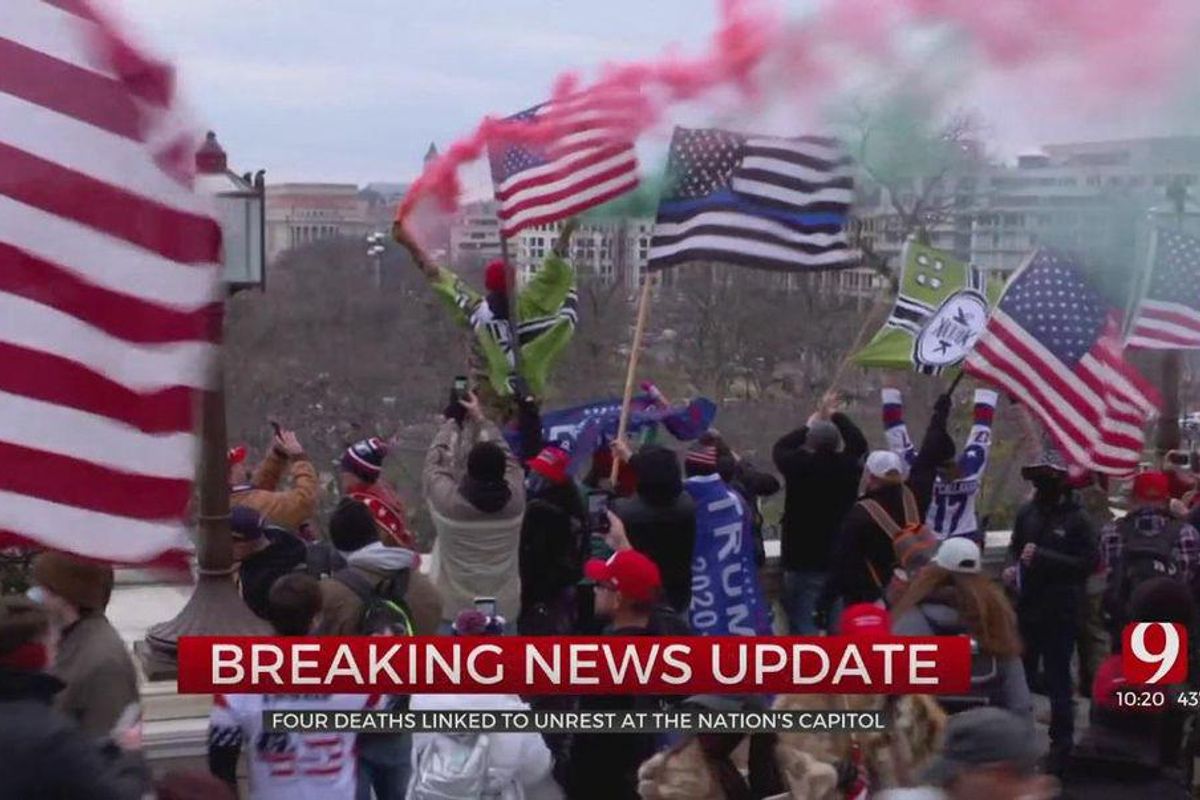 It’s commonplace now for politicians to warn about a "constitutional crisis.” They present the end of American democracy as just around the corner but usually preventable if you send them a check. However, the crisis is already here. We’re soaking in it.

Trump has reconquered his party by setting its base on fire. Tens of millions of Americans perceive their world through black clouds of his smoke. His deepest source of strength is the bitter grievance of Republican voters that they lost the White House, and are losing their country, to alien forces with no legitimate claim to power. This is not some transient or loosely committed population. Trump has built the first American mass political movement in the past century that is ready to fight by any means necessary, including bloodshed, for its cause.

Democracy requires everyone agreeing to the same basic rules, and Trump has already torched any concept of a shared reality. He’s chipped away at the foundations since he first came down the escalator. When he claimed that everyone else — the Japanese, Chinese, the Mexicans — was beating “us” (white people), we rolled our eyes like Nick Carraway as Tom Buchanan raved about the “rise of the colored empires,” but this rhetoric resonated with a frustrated white demographic that believed they were on the losing side of history.

Trump previously challenged Barack Obama’s legitimacy as president, so it wasn’t a stretch that he would challenge Joe Biden’s on equally baseless (and racist) grounds. The "bitter grievance of Republican voters that they lost the White House, and are losing their country, to alien forces with no legitimate claim to power” did not occur spontaneously in November when Trump refused to concede the election he’d lost. Those very grievances are what first put him in the White House. Republicans might have tepidly rejected this rhetoric in 2015 but now it’s their sole policy position.

Most violent extremism in the United States and across the globe is a young asshole’s game. They’re usually in their 20s and early 30s, but Ropert A. Pape, an expert on political violence, noticed that the median age of the January 6 insurrectionists was 41.8. Most violent extremists the FBI arrests are broke-ass and jobless, but only seven percent of the Capitol rioters were unemployed and they were hardly “forgotten” working men and women. More than half had white-collar jobs or even owned their own businesses.

There were doctors, architects, a Google field-operations specialist, the CEO of a marketing firm, a State Department official. “The last time America saw middle-class whites involved in violence was the expansion of the second KKK in the 1920s,” Pape told [Gellman].

The Tea Party was a white, middle-class movement, and while not overtly violent, it was the product of racist backlash to Obama’s election. Republicans exploited the backlash, tip-toeing around the racism, for their immediate political gain. They cocked the weapon and handed it over to Trump, but we give him too much credit when we assume that if he hadn’t won in 2016, the problem would have gone away. (We can only imagine the violent backlash against Hillary Clinton.)

A reported six out of every seven January 6 insurrectionists charged with crimes had no previous affiliations with extremist groups, such as the Proud Boys, the Oath Keepers, or the Three Percenters militia. This wasn’t a surprise to University of Chicago historian Kathleen Belew, who told Gellman: “January 6 wasn’t designed as a mass-casualty attack, but rather as a recruitment action.”

This is a light bulb moment, because we can see now that January 6 wasn’t an ending but an escalation. Gellman argues that Trump’s speech to the MAGA mob on January 6 was “more disciplined than usual for a president who typically spoke in tangents and unfinished thoughts.” He wasn’t just raving. This was deliberate.

“Our country has been under siege for a long time, far longer than this four-year period,” Trump told the crowd. “You’re the real people. You’re the people that built this nation.” He famously added, “And we fight. We fight like hell. And if you don’t fight like hell, you’re not going to have a country anymore.”

Pape and his staff discovered that counties Trump actually won in 2020 were less likely to send insurrectionists to the Capitol on January 6 than counties Biden had won. No, that doesn’t mean they were all Antifa. They didn’t come from counties where white household income was decreasing, either. The “one meaningful correlation” is that insurgents were “much more likely to come from a county where the white share of the population was in decline.”

This exact pattern harkens back to the GOP primary. The March 2016 New York Times article “Why Trump Has Done Worse In Mostly White States” documented how Trump’s white identity politics landed best in states where voters felt that identity was under assault. Daily News columnist Marc Ambinder argued that empathy for “forgotten” non-college whites was the answer (as if Democrats weren’t sufficiently empathetic). Five years later, Democrat Steve Bullock made a similar point. It’s the path of least resistance through a forest of denial. Neither the Tea Party nor Trumpism was ever about economic anxiety.

Pape has compared Trump’s actions on January 6 to Slobodan Milošević, who’d appealed "to fears that Serbs were losing their dominant place to upstart minorities."

Just like Milošević, Trump had skillfully deployed three classic themes of mobilization to violence, Pape wrote: “The survival of a way of life is at stake. The fate of the nation is being determined now. Only genuine brave patriots can save the country.”

During a climactic scene in "The Pretender" TV series, our hero confronts the man who’s been tormenting him all his life. “What have I ever done to you?” he demands, and the villain simply responds, “You exist.” That’s the great crime minority groups have committed against Trump’s America, and we can’t resolve it with free college or improved infrastructure. We exist, and they’d rather we not.