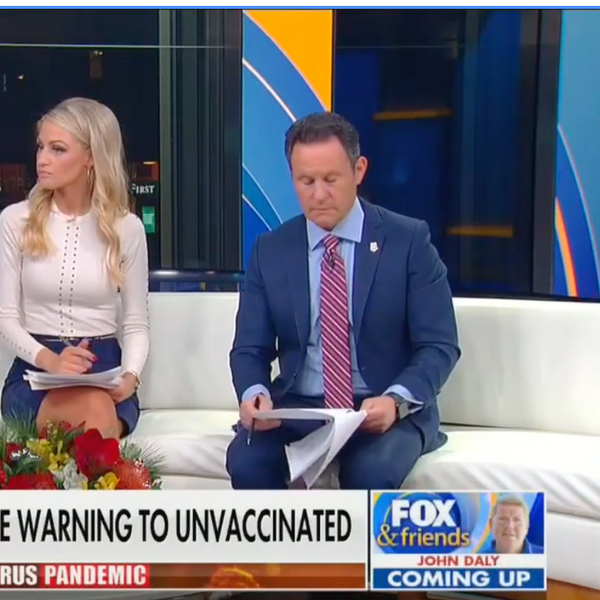 Sunday, during his aptly named “History Tour” with Bill O’Reilly, Donald Trump admitted that he’s gotten the COVID-19 booster shot. This isn’t surprising because Trump is a coward who values his own life above everything else. Trump advised his faithful supporters not to play into “their” hands and refuse the vaccine, and like a typical unhinged mob, they turned on him. It wasn’t quite the cannibalistic end of Suddenly Last Summer, as I might’ve wished, but it was still nice to hear Trump booed by the MAGA hat set.

These fools are never going to get vaccinated, and it’s adorable that liberals believe selfish, brain-addled assholes might consider doing the right thing if the head asshole recommends it.

COVID-19 is knocking America on its ass again, thanks to the Omicron variant, and the usual geniuses at Fox News are seizing on the renewed crisis to argue against vaccination. Maybe vaccines don’t work at all because they don’t work 100 percent of the time? This is what you say when you don’t know how vaccines work. It apparently requires advanced medical training to notice the difference between flu symptoms that last a few days and death, which is fatal.

Democratic Senators Cory Booker and Elizabeth Warren have both announced they contracted breakthrough COVID-19 cases. Monday, Tucker Carlson said, “But you can’t help but notice that between them, Booker and Warren have had at least 6 vaccine injections and now they’re sick. So, what is the lesson here, exactly?”

The “lesson” here is that the 72-year-old Warren will make a full recovery from a mild illness. Also, Booker’s a vegan and in seemingly great physical condition, but he still caught the virus, despite the ableist rhetoric from Marjorie Taylor Greene and other dullards. The “lesson” is that the vaccines work.

This morning, on "Fox & Friends," Ainsley Earhardt stand-in Carley Shimkus praised Trump’s bold pro-staying-alive position. She noted that about “74, 75 percent of Americans are at least partially vaccinated. That’s a high number.” Shimkus even said it was “fine” that President Joe Biden planned to encourage vaccinations. Then she shifted into anti-vax propaganda.

SHIMKUS: If you look at the reality of the situation, if somebody isn’t vaccinated right now, and they look at their two friends who between the three of them has had six shots against COVID and they still got it because of Omicron, realistically that person isn’t going to get vaccinated.

Then this person is an idiot.

If you’re unvaccinated, you’re more likely to contract COVID-19 and you’re more likely to experience severe illness and you're more likely to die. I know holier than thou liberals can get huffy over the term “pandemic of the unvaccinated,” but I resent the implication that COVID deniers and anti-vaxxers are similar in any way to gay people during the early days of the AIDS epidemic. We aren’t making this an “us” versus “them” issue because of cruel bigotry. We want everyone to be protected. We didn’t think we’d have to make a scene over something so simple. Get vaccinated and boosted.