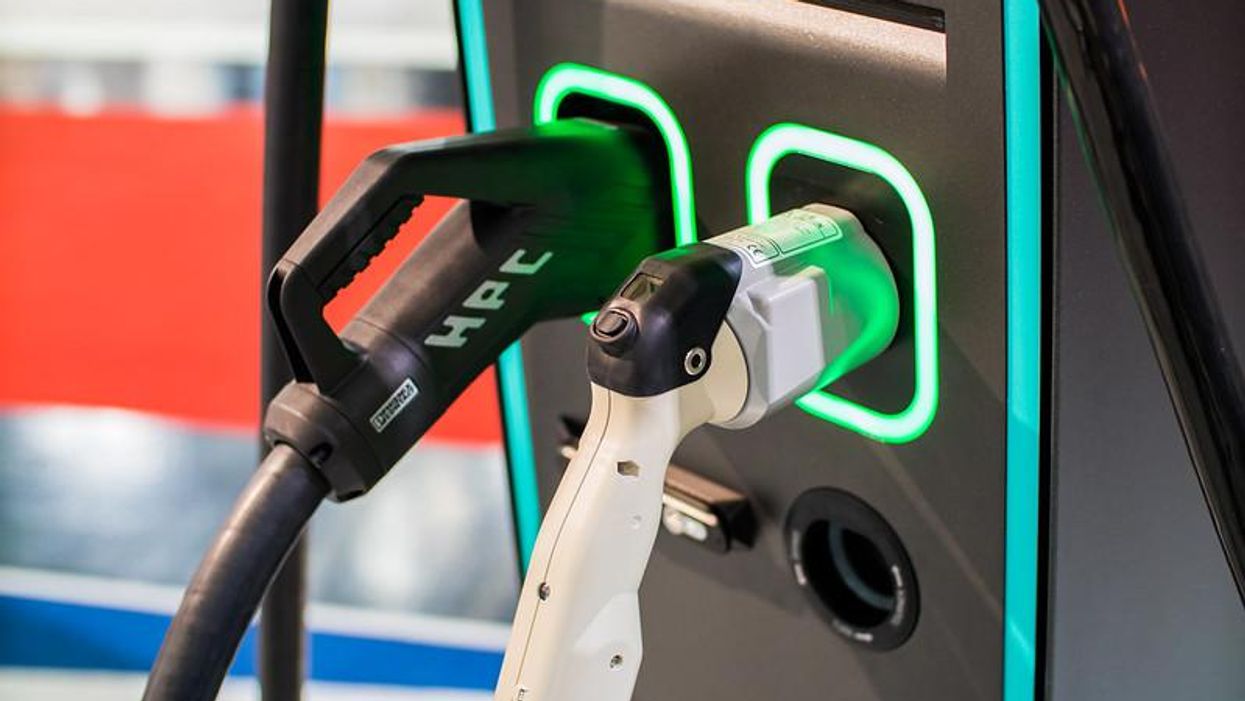 A couple years back, when I was shopping for a used car, I knew I wanted a hybrid, because just look at me being a big ol' eco-commie leftie (but the middle-aged kind who isn't up for riding a bike everywhere). The used car dealer, thinking it was a hybrid, showed me what turned out to be an electric Kia Soul, and it was fun and quiet to drive around the parking lot if nothing else. But at the time, I lived in apartment that only had street parking, so a full-on EV wasn't an option. Darn right I was glad to find a place with a garage when I moved, and if I stay here, I plan to get a used EV once used car prices come down from the stratosphere.

My little EV problem is magnified by millions of Americans who might consider an EV, but are put off because there's no place nearby where they can conveniently charge one, a problem the Washington Post explores in a really good, thought-provoking article today. (Let's see if my "gift an article" linky allows Wonkers to get past the paywall?)

If America is going to get off the fossil fuel teat — and we have to! — we need to make sure that people in poor, minority, or urban communities are included in the transition.

Look at any map of charging stations in the United States, and in most of the big cities, what is immediately apparent are big blank spaces coinciding with Black and Latino neighborhoods. Electric vehicle advocates call them charging deserts.

While electric vehicle use is growing rapidly in well-to-do, mostly White communities, minority neighborhoods are being left behind.

What's especially nice about this story is that it's not just pointing out the problem; reporter Will Englund talks with a bunch of people and organizations that are already working to address it, like Chicago environmental activist Naomi Davis, founder of the group Blacks in Green, which is working to get public EV charging stations installed in mostly Black neighborhoods. For starters, in the parking lot of her group's headquarters.

Davis, like most of those interviewed in the piece, says that Black entrepreneurs and community leaders have to lead the charge (as it were) to get charging stations built in Black communities.

“We’re used to elbowing our way to the table,” Davis said. “You have to push and step in and get momentum, because if you don’t, you’ll never catch up.” [...]

It's not just a matter of making sure that there's equity in access to cool technology either; it's a matter of environmental justice. People of color in economically disadvantaged areas are already more likely to have respiratory illnesses and other health problems related to air pollution (because thank you, America, all the freeways got built through their "blighted" neighborhoods). If the EV boom bypasses urban neighborhoods, then many of the pockets where internal combustion vehicles remain will be poor, Black, and Latino, potentially for decades.

Activist-entrepreneur Billy Davis (no relation to Naomi) plans to start an EV ride sharing service in the Bronzeville neighborhood of Chicago. In collaboration with colleagues at a community development nonprofit, he's also working to refurbish a 1920s-vintage Ford dealership into a combined coffee shop-recharging station to be called "Jolt" (because caffeine and electricity, make sure each goes in the right place). Getting EV infrastructure into Black communities is all about addressing the very real transportation sins of the past, says Davis, which have become even more glaring with the disparate impact of COVID-19 in communities of color:

“We approach this from a viewpoint of environmental justice,” Davis said. “Interstate construction disrupted the chain of wealth-building, and it has a negative health impact.” [...]

“Our proximity to the negative effects of fossil fuel production, to the interstate highway, puts us at risk,” he said. “When you have charging deserts, this is where the investment has to occur, because this is where the problem is most egregious — lung disease and asthma and so forth. There is such a thing as environmental racism, so there has to be a reckoning.”

We’re not here to be lab rats,” she said. For too long, she argued, nearby universities and city agencies have pointed to the problems of Bronzeville to justify the funding of various pilot projects.

“Keep your blight close” is the attitude, she said. “It’s not always vicious, but we’ve been falling for the okey-dokey too long. We see ourselves as co-producers, co-innovators. We have to assert ourselves in terms of that equity.”

The article also looks at various nonprofit programs around the country that aim to get charging stations and EVs into underserved areas, as well as a for-profit effort that may or may not work elsewhere: A New York company called "Revel" has launched a fleet of electric taxis in the Bedford-Stuyvesant neighborhood, along with a great big charging station for both its cabs and local EV users.

The charging station is equipped with direct-current fast chargers, which are much more expensive to install than slower models and use significantly more electricity. [Revel-cofounder Paul ] Suhey argued that these are the best solutions for people who have nowhere to charge their cars at home or while on the job.

That model may only work in New York and other cities that have an existing reliance on taxis, though.

The prevailing thinking is that this really is a Field of Dreams market problem: You gotta build the charging stations to get people thinking seriously about owning an EV in places where individual garages or even carports are rare. So among the ideas out there are solutions like Illinois's new green energy plan, which subsidizes EV purchases on a sliding scale based on family income. Chicago, for its part, has passed an ordinance requiring charging stations for all new multifamily residences. Other cities are working on car-sharing programs that will include public charging stations.

This is some exciting stuff. The bipartisan infrastructure bill passed last month includes $7.5 billion to start building a nationwide network of charging stations; as that actually starts happening, we'll need to pressure the administration to make sure stations get sited in urban areas, not just along freeways. That's probably already in the works as part of Biden's pledge that 40 percent of climate projects should benefit frontline communities affected by climate change, but I haven't seen anything about EV-specific plans.

Yes, and we'll need to continue funding grid upgrades; it's in there.

And of course, there's public transit, which needs to be upgraded and electrified (I just saw Boise's first electric bus the other day, the first of many that will come online), because if you have good transit, you don't need a car at all. WaPo notes that in Chicago, a quarter of families already do without a car, so we need to make sure they have reliable transportation too.

Hell, in the very near future, let's actually enact an "EV Cash for Internal Combustion Clunkers" program, an idea in Joe Biden's climate plan for the 2020 campaign. Or to get really ambitious, how about this terrific idea from New York Times opinion writer Jay Caspian Kang: Cities could give every resident who wants one an electric bike, and we could reconfigure lots of city streets to be closed to cars but open to e-bikes. The savings in infrastructure maintenance alone would help pay for it.

Is Yr Dok Zoom in the grip of a climate and electrification mania, like he was with the My Little Pony stuff for a while (2012 to right now)? Could be. It's pretty neat stuff, especially the prospect of keeping the planet habitable by large mammals, including those of us who might ride a bike more if it could zip up hills. Not to mention the not inconsiderable benefits of creating jobs and cutting deaths from air pollution.

Let's get Barack Obama in on this, too. Get him to change his call and response a little: CHARGED UP! READY TO GO!

And now it is your OPEN THREAD!

Yr Wonkette is funded entirely by reader donations. If you can, please give $5 or $10 a month to help keep our motors humming.