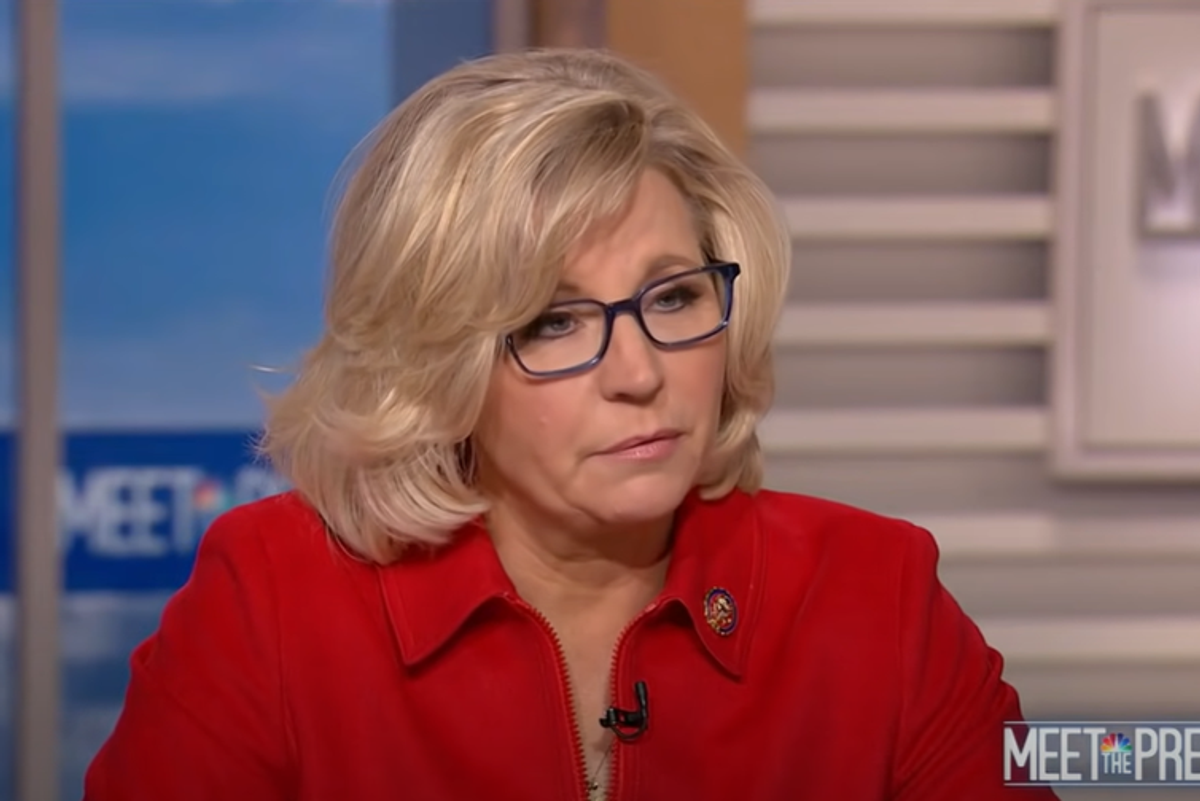 Remember those days when the GOP mocked Democrats as the cult of Obama? And now a big part of their base is a literal cult which doses itself with horse paste and rejects modern science? Good times!

Rep. Liz Cheney is the latest casualty in Republicans' descent ever deeper into madness, with her own state party voting to expel her from its ranks for crimes against Trump most foul. The Casper Star-Tribune reports that the Wyoming GOP Central Committee voted Saturday 31-29 to cease recognizing the party membership of the state's only Representative in the US House.

In February, the party voted to censure Cheney for her impeachment vote. Then in August the Republican parties of Park and Carbon counties voted unanimously to boot Cheney for her role in the January 6 investigation, passing a resolution which falsely blamed Antifa and Black Lives Matter for provoking rioters to overrun the Capitol.

"Representative Elizabeth Lynne Cheney, will officially no longer be personally recognized by the Carbon County Republican Party as a 'REPUBLICAN' Representative," they wrote, in the non-binding document.

"In short, and in the immortal words of the 45th President of the United States of America, Donald J. Trump...'You're Fired!'" they concluded, and no we're not "joking," they literally did that. Because these are very serious people.

And indeed that seriousness was on display this weekend in Buffalo, Wyoming, as the Central Committee convened to grunt and shout and show that little lady who's boss.

No quantifiable or undisputed evidence of BLM or Antifa's involvement was offered either, but the Committee nonetheless included them in its resolution.

"To further her own personal political agenda, Representative Liz Cheney has not only caused massive disruption, distraction and division within the House Republican Conference, but has also willingly, happily, and energetically joined forced with and proudly pledged allegiance to democrat Speaker of the House Pelosi, as a means of serving her own personal interests while ignoring the interests, needs and expectations of Wyoming Republicans," they huffed, refusing to even capitalize "democrat," because OOOH, SICK BURN!

The resolution concluded by calling on Minority Leader Kevin McCarthy to ensure that their tiny state lose any vestige of power in the lower house of Congress: "House Republican Conference Leadership immediately remove Representative Liz Cheney from all committee assignments and the House Republican conference itself, to assist and expedite her seamless exodus from the Republican Party."

As for Cheney, who knows she'll have a tough fight on her hands next November, she wasn't backing down.

"It's laughable to suggest Liz is anything but a committed conservative Republican," her spokesman Jeremy Adler told the Star-Tribune. "She is bound by her oath to the Constitution. Sadly, a portion of the Wyoming GOP leadership has abandoned that fundamental principle, and instead allowed themselves to be held hostage to the lies of a dangerous and irrational man."

But hostages are generally held against their will. And the Wyoming GOP — indeed the entire Republican Party writ large — appears to be willing participants in this nutbaggery, eagerly prostrating itself to a spray-tanned charlatan who parades himself as an avatar of masculinity while embodying every sin and weakness they claim to despise.

Let's call it what it is. It's a cult, and they're shunning an apostate. But if the GOP wants to stick a shiv in one of their most effective leaders, who are we to stop 'em.